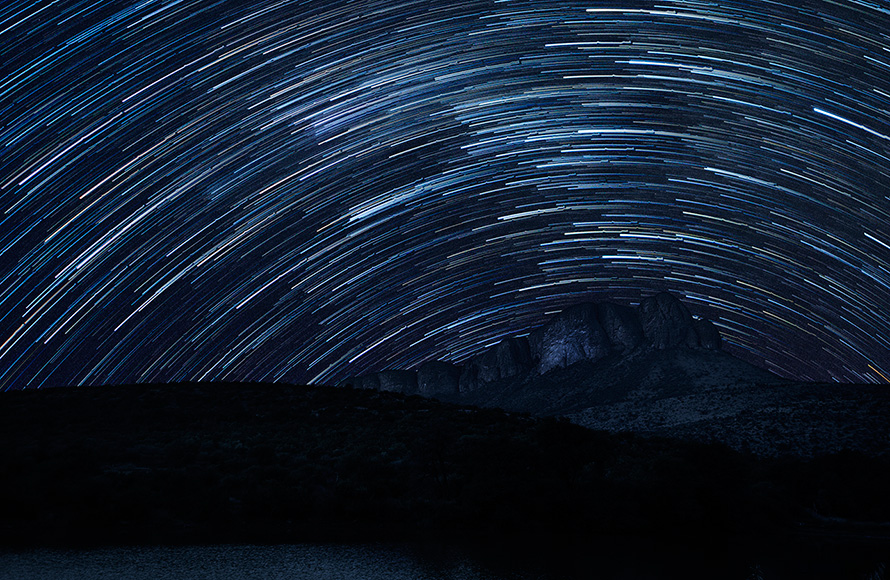 Star trails curve over the massif of the Waterberg Mountains in a time-lapse night shot taken from the Tlopi Tented Camp in Marakele National Park, Limpopo province. The surface of Tlopi Dam can be seen in the foreground. (Martin Heigan, CC BY-NC-ND 2.0)

Street art on the mountain 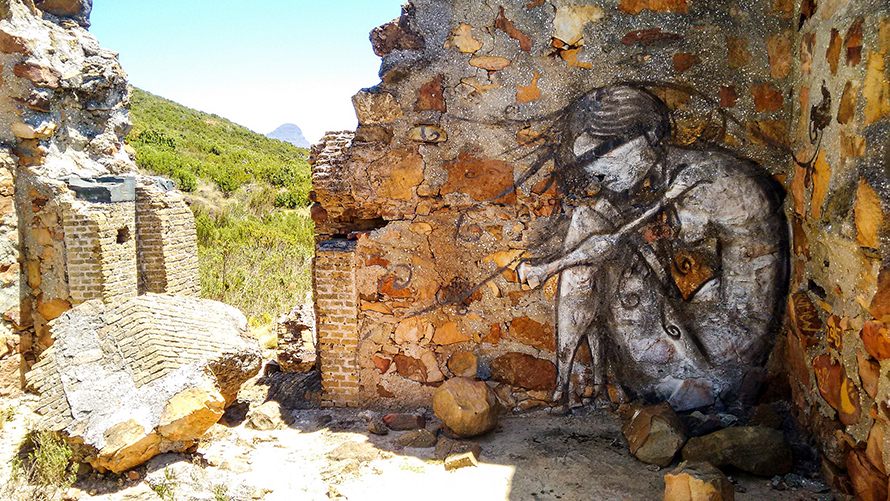 The Grootdraai Dam in torrent 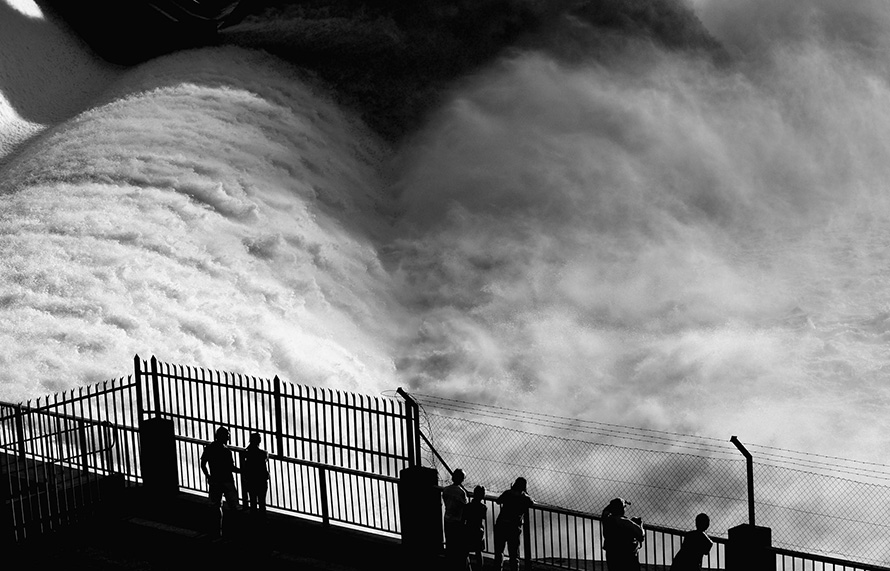 Water floods through the opened sluice gates of the Grootdraai Dam near Standerton in Mpumalanga. (Jan Truter, CC BY-NC-ND 2.0)

21 March: From Sharpeville to Langa to Human Rights Day 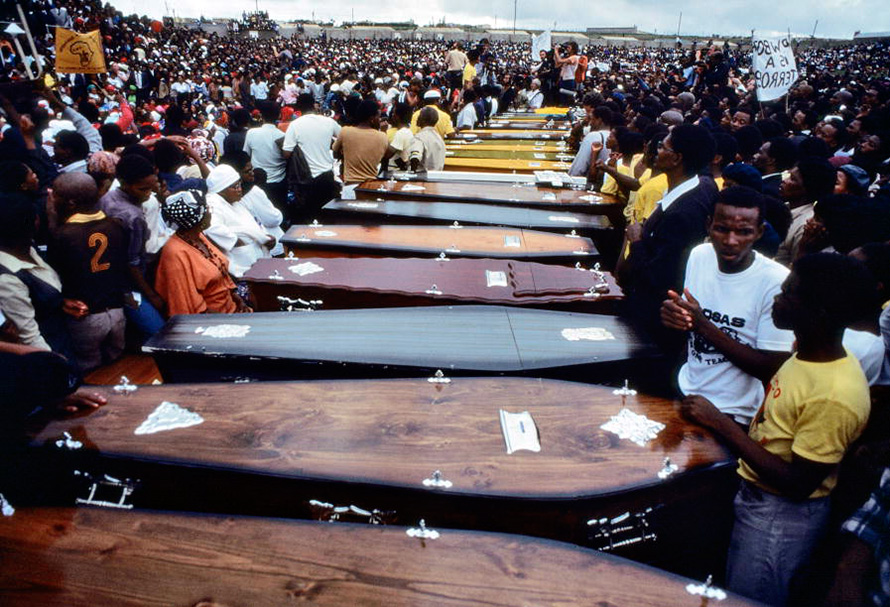 The coffins of those slain in the Langa Massacre of 21 March 1985. Twenty-five years to the day after the infamous Sharpeville Massacre, in which 69 people were killed, police opened fire on a crowd of people on their way to attend a funeral in Langa, Uitenhage, in the Eastern Cape. At least 20 people were killed. Today the 21st of March is commemorated as Human Rights Day, a public holiday. The United Nations marks 21 March as International Day for the Elimination of Racial Discrimination. In Namibia, South Africa’s northern neighbour, it’s Independence Day.   (UN Photo, CC BY-NC-ND)

The Cosmopolitan in Maboneng 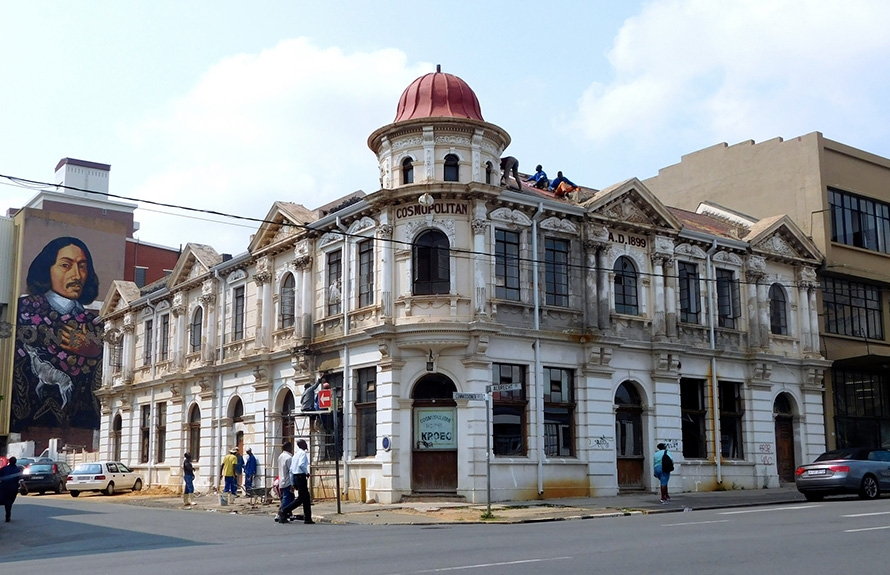 The Cosmopolitan building and a mural of Jan van Riebeeck in the Maboneng inner-city regeneration precinct in downtown Johannesburg. The Cosmopolitan was built in 1899, when the mining town was just 13 years old. (Adamina, CC BY 2.0)

Nguni cow on the Wild Coast 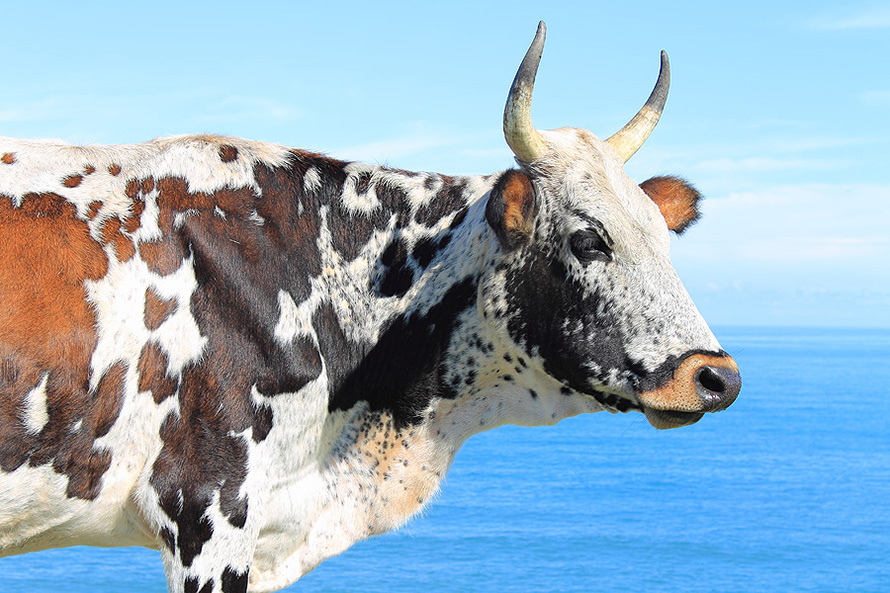 An Nguni cow on the beach at Morgan’s Bay in the Wild Coast region of the Eastern Cape. Ngunis, a breed of Zebu cattle, are famous for their uniquely patterned colourful hides. (Gareth Photo, CC BY-NC-ND) 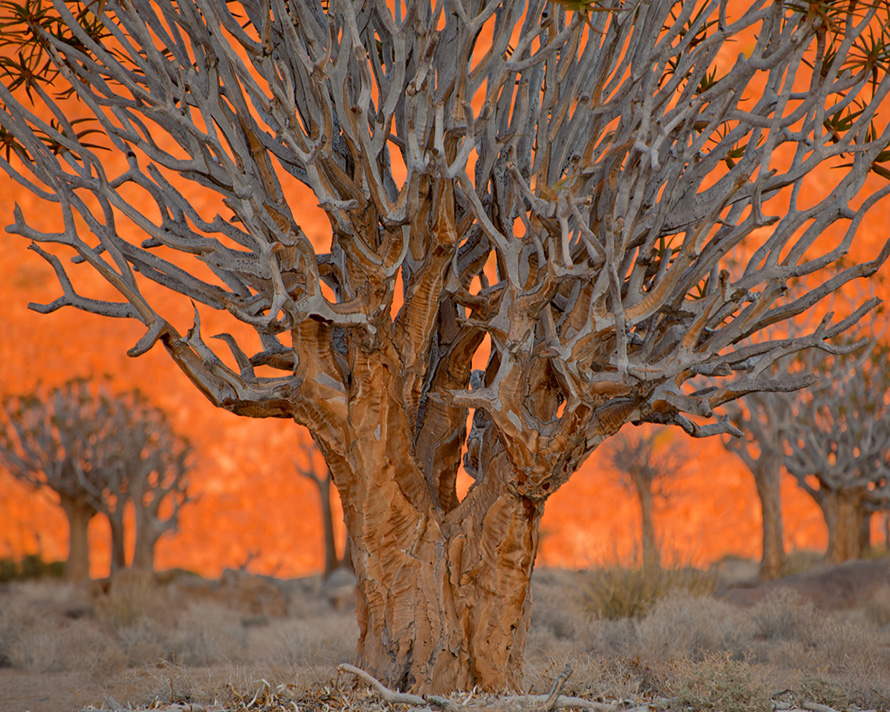 Quiver trees – “kokerboom” in Afrikaans – at sunrise in the Richtersveld National Park, in the far north of the Northern Cape. The Richtersveld Cultural and Botanical Landscape is one of South Africa’s nine Unesco World Heritage Sites. (Appalachian Dreamer, CC BY-NC 2.0) 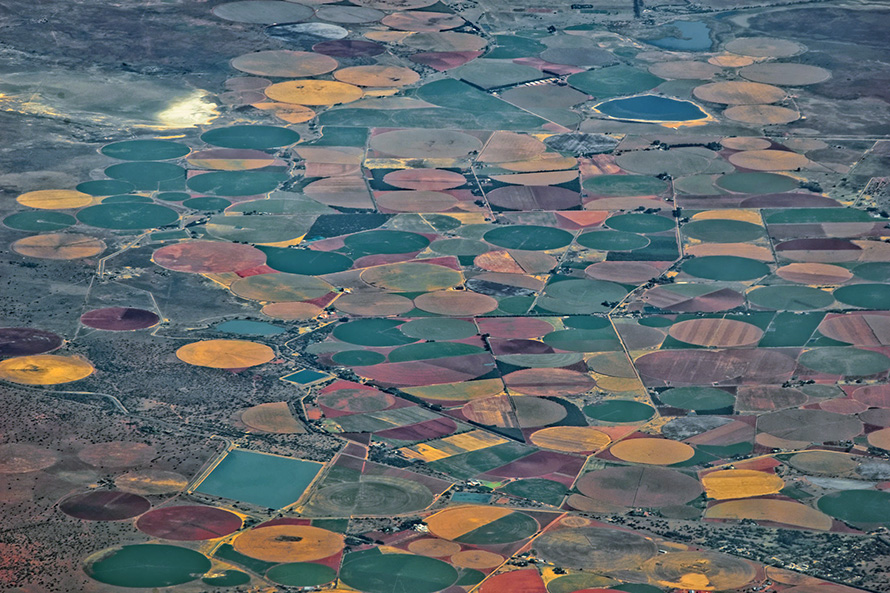 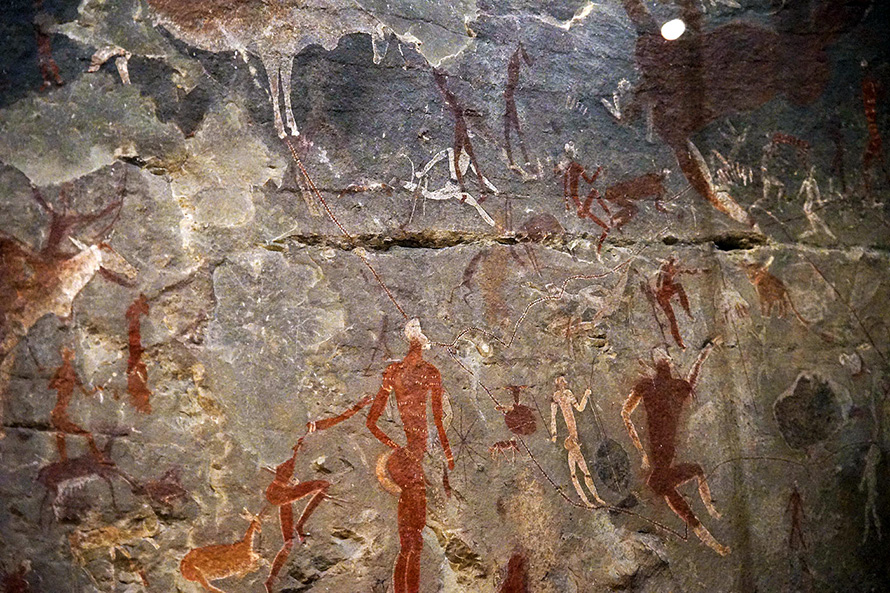 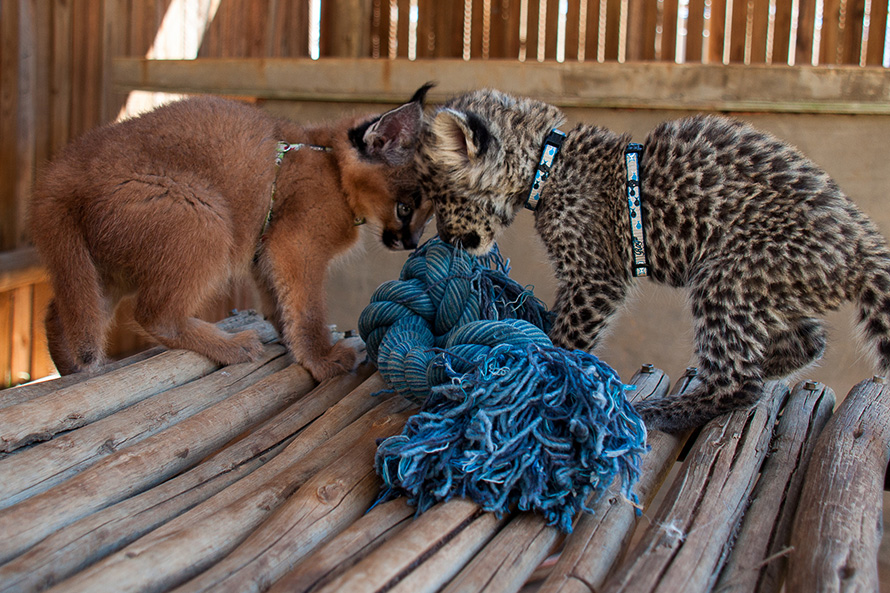 Big cat kittens but heads over a toy at the Cheetah Experience carnivore sanctuary near Bloemfontein in the Free State. At left is a caracal kitten, and at right a leopard kitten. Things will change. Grown caracals weigh, at the most, 18 kilograms. Adult male leopards can be as large as 60 kilograms. Adult domestic cats are only four to five kilograms. (Chris Parker, CC BY-SA 2.0)

The Cradle of Humankind 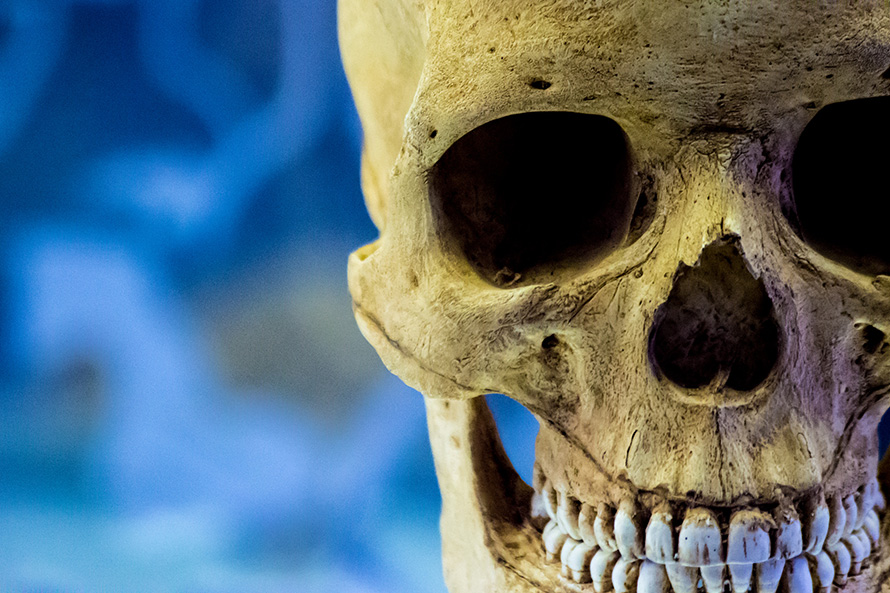 A replica of a human skull on display at the Sterkfontein Museum in northeastern Gauteng, in the Cradle of Humankind World Heritage Site. Important fossils of hominin species going back millions of years – the relatives and possible ancestors of modern humans – have been found in the nearby Sterkfontein Caves and other sites in the region. (Andrew Moore, CC BY-SA 2.0)

Summer clouds and lightning over Joburg 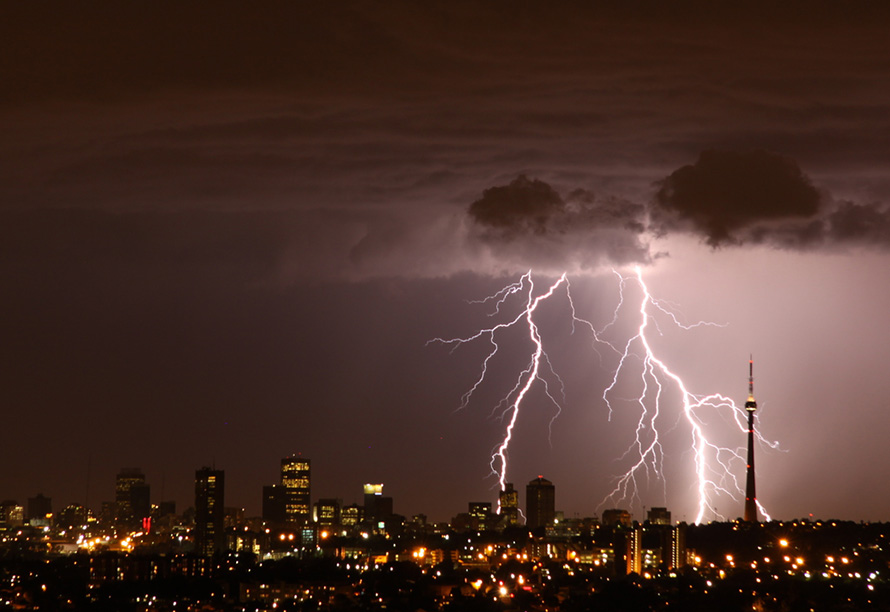 The clouds and lightning of a summertime thunderstorm over Johannesburg. The Brixton Tower is at right, and the buildings of the city’s old central business district towards the left. (Derek Keats, CC BY 2.0) 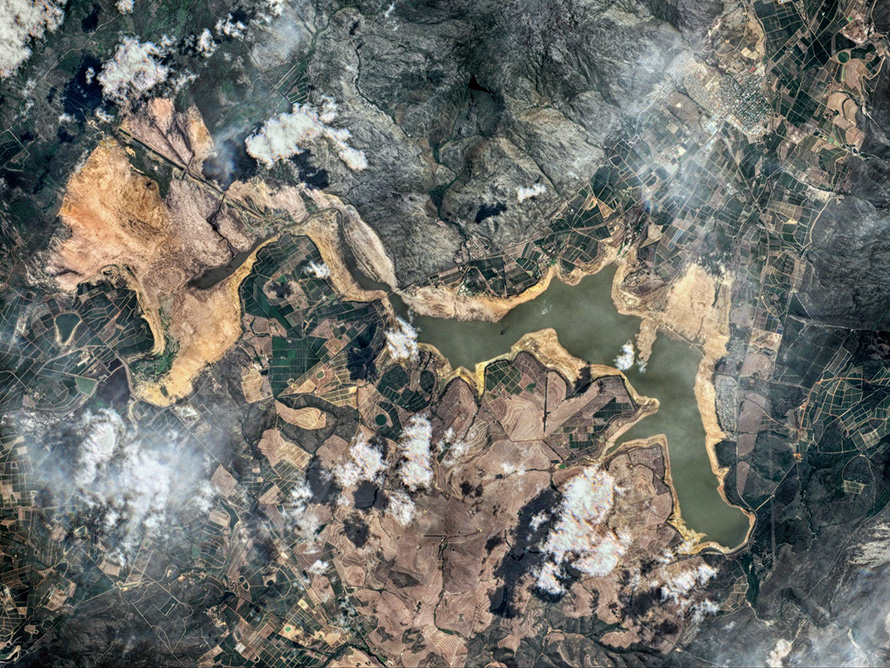 A satellite image of Cape Town’s Theewaterskloof Dam in early February 2018 shows the seriousness of the city’s drought. After three successive dry years, the dam, which supplies half of Cape Town’s water, was at only 13% capacity. (Antti Lipponen, CC BY 2.0) 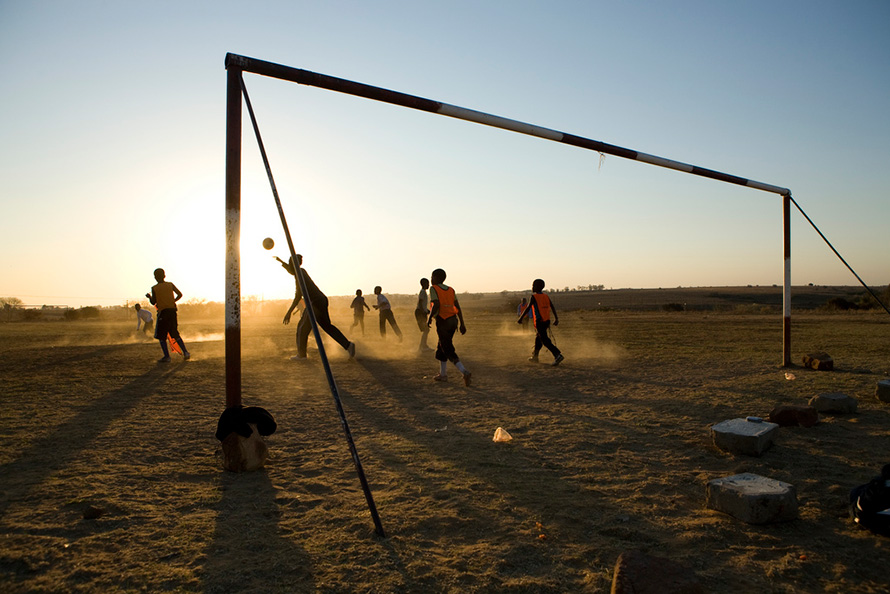 The Young Vaal Eagles under-14 football team train on a field near Deneysville, a town on the banks of the Vaal Dam in the Free State. (John Hogg, CC BY-NC-ND 2.0)

Off to the beach in Strand 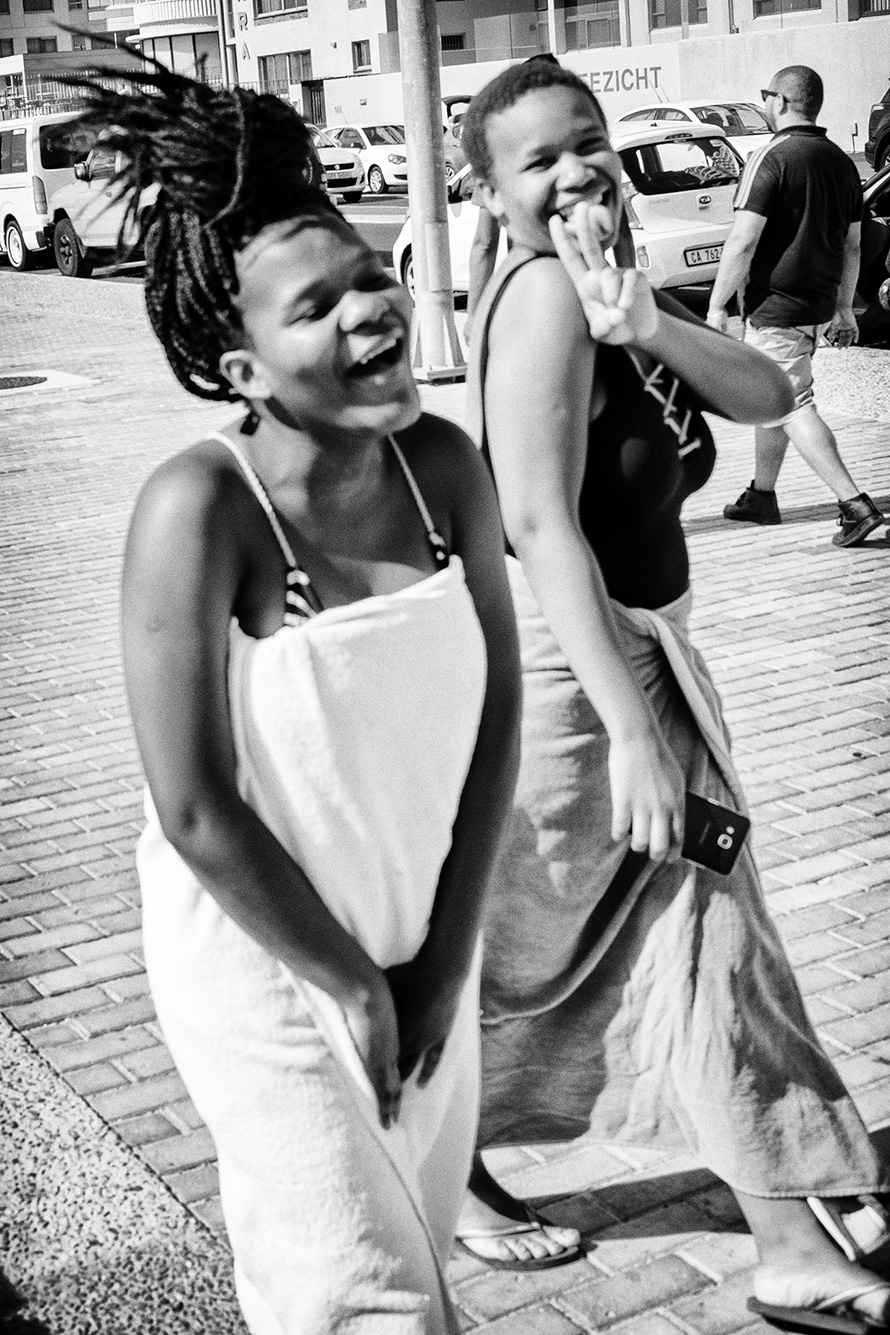 Holidaymakers on the way to the beach in the seaside resort of Strand (Afrikaans for “beach”) on the eastern shore of False Bay in the Western Cape in December 2018. (Steve Crane, CC BY-NC-ND 2.0)

Children work the mines in 1988 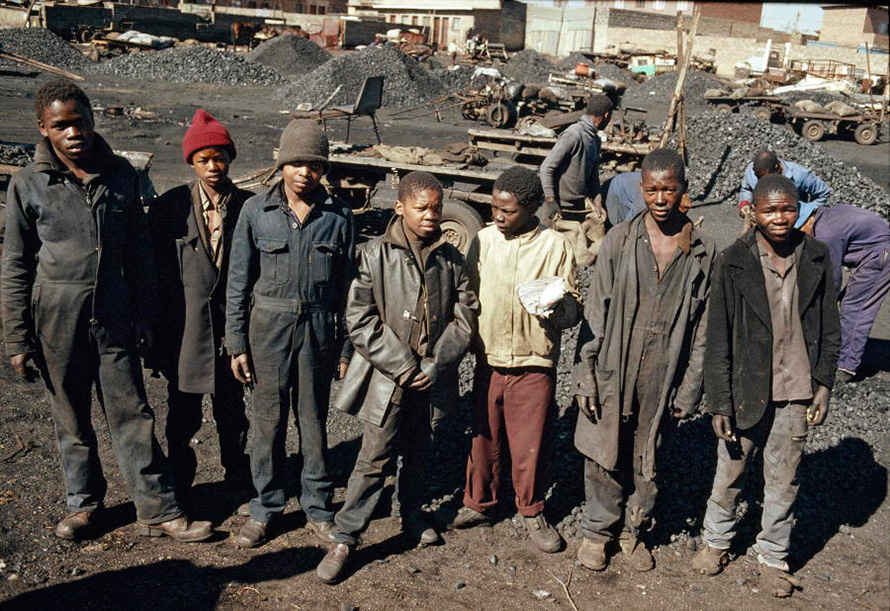 A sky view of South Africa 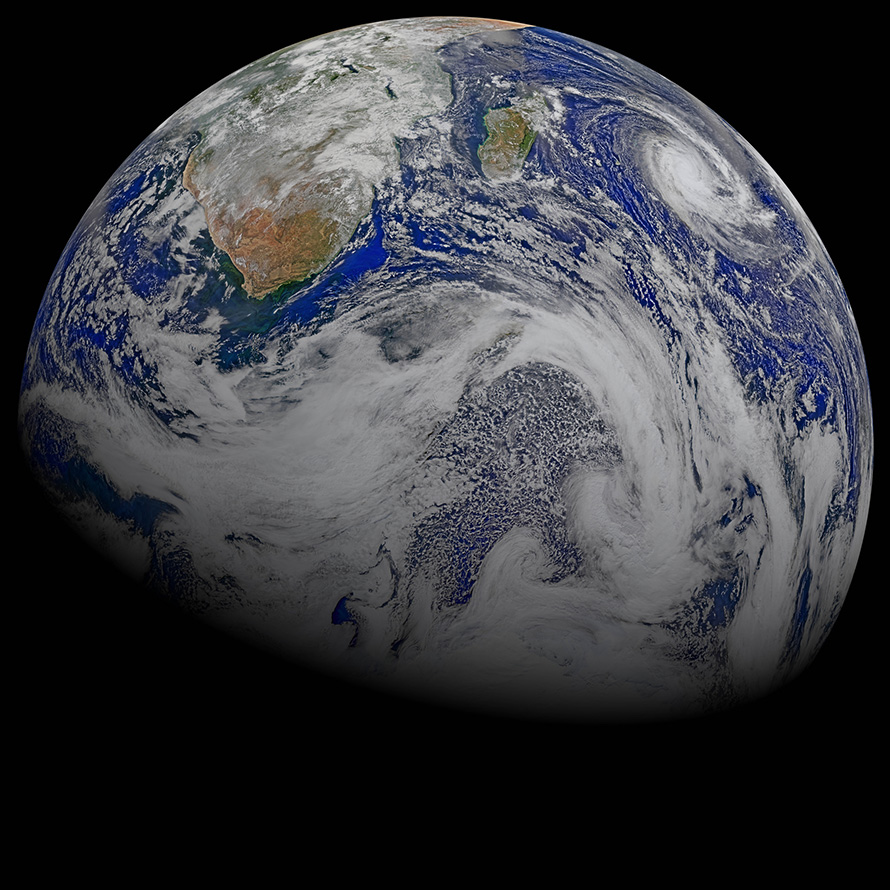 South Africa and the island of Madagascar are the only landmasses visible on the planet in this composite image captured by six orbits of the Nasa-NOAA Suomi National Polar-orbiting Partnership spacecraft on 9 April 2015. Tropical cyclone Joalane can be seen over the Indian Ocean. (Nasa, CC BY 2.0) 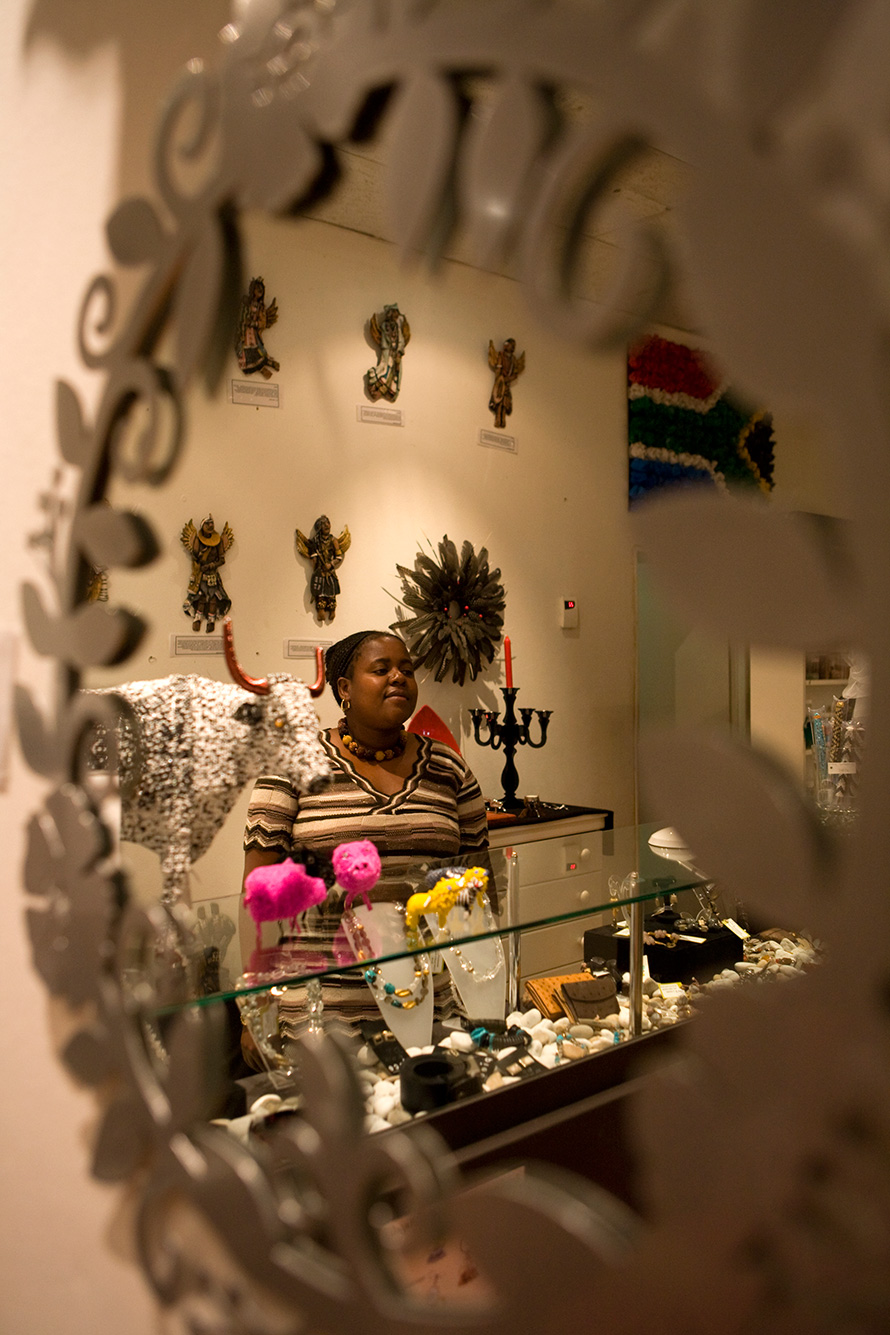 Beauty Maswanganyi is the shop manager and a contributing artist at Piece, an enterprise in Johannesburg specialising in indigenous art and craft objects from around southern Africa. (John Hogg, CC BY-NC-ND 2.0) 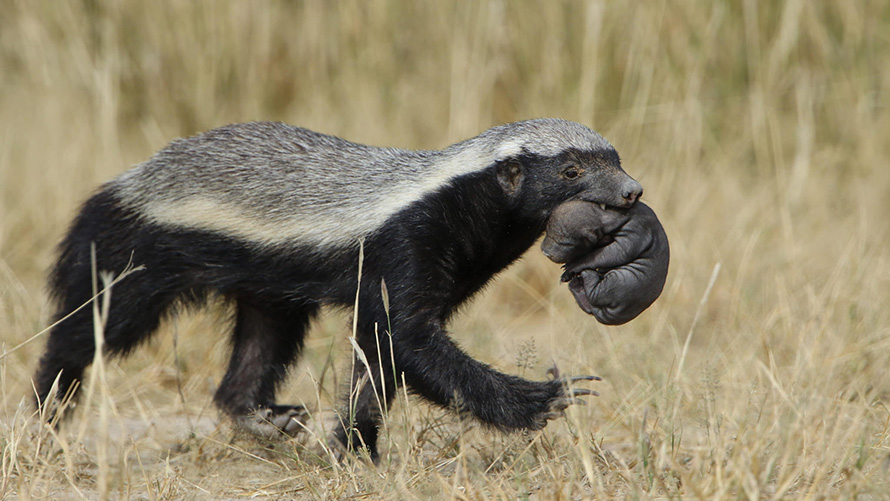 A lucky shot of a honey badger carrying her pup, in the Kgalagadi Tranfrontier Park region of the Northern Cape. The honey badger is one of the most fearless and intelligent carnivores on the planet. They live in fiercely defended underground burrows, so their young are rarely seen. (Derek Keats, CC BY 2.0) 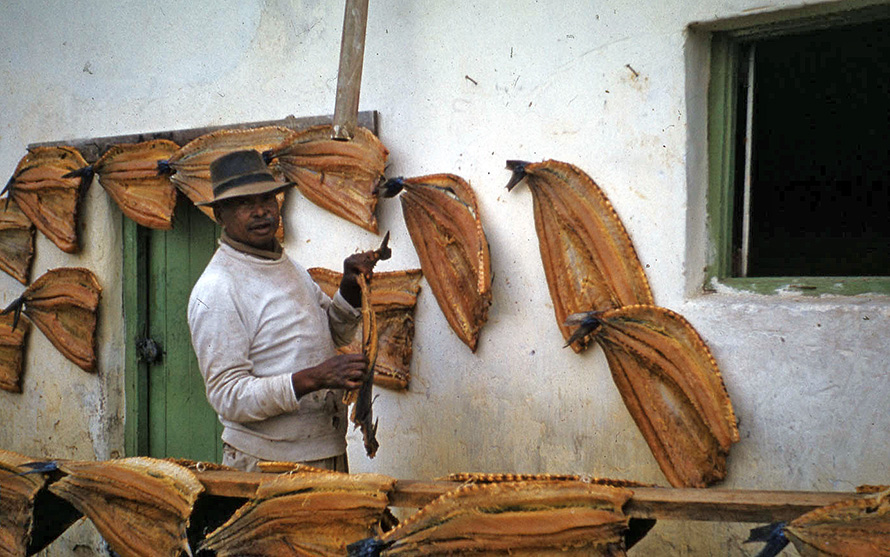 Snapped in 1960 and rare in its record of black people’s daily lives during apartheid, this archive photo shows a fisherman in Saldanha Bay on the west coast moving his sun-dried snoek indoors as rain approaches. (Dr Mary Gillham Archive Project, CC BY 2.0)

Power stations against the sky 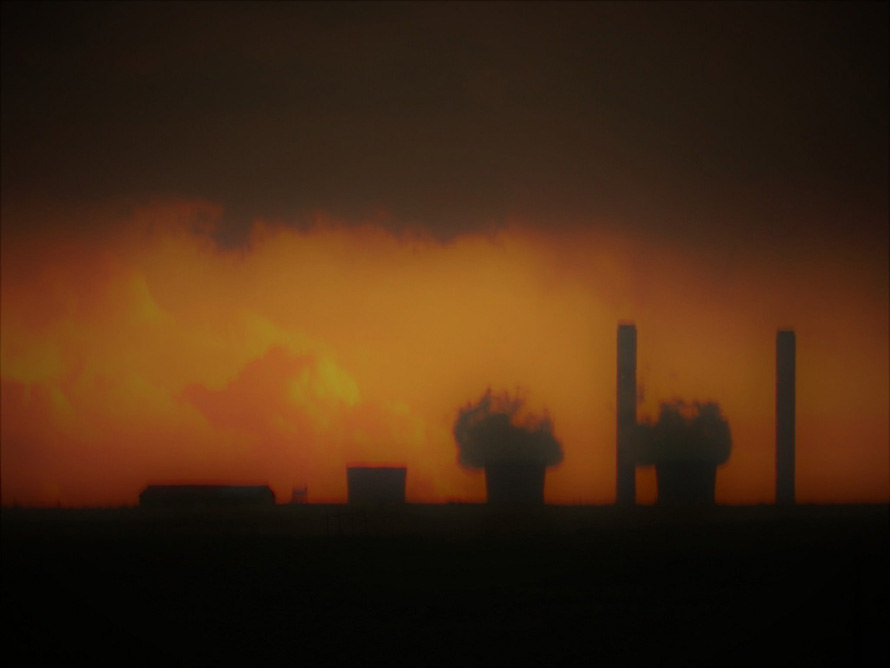 Coal-fired power stations outside Emalahleni, a town previously known as Witbank, in Mpumalanga. Emalahleni means “place of coal” in South Africa’s Nguni languages. According to European Union research, the Emalahleni region has some of the most polluted air in the world, with chromium and barium levels higher than instruments could record. (Jane Flowers, CC BY 2.0) 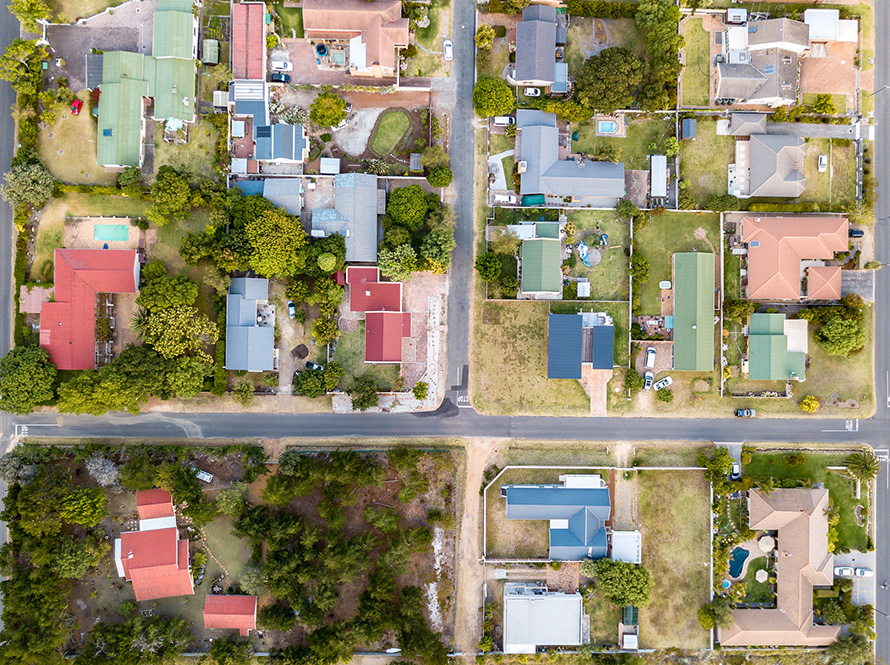 Houses and gardens in Kleinmond, a small town in the Kogelberg Nature Reserve on the Atlantic coast some 90 kilometres east of Cape Town. (Kevin Rechts, CC BY-NC 2.0) 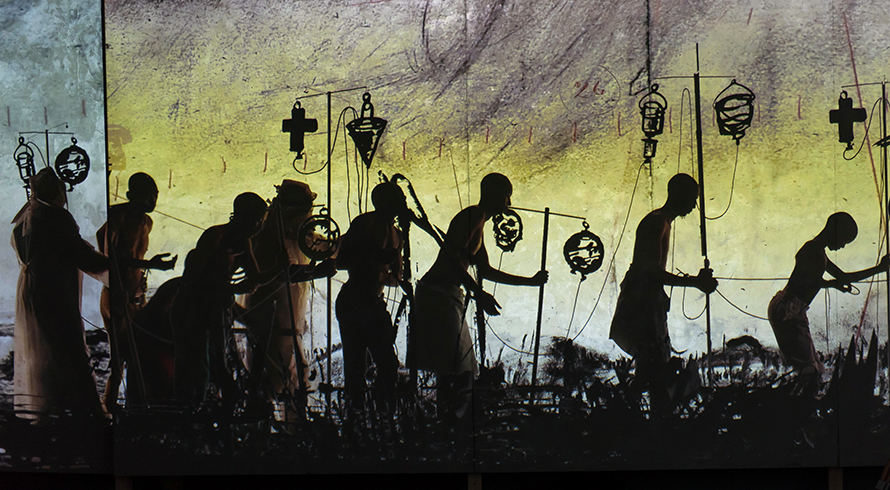