Infographic: South Africa’s rural and urban population from 1960 to 2016

From 1960 to the late 1980s, apartheid laws kept families and communities in poor rural areas. Young men alone were allowed to move to the cities, where their labour was valuable. After the end of apartheid, from the mid-1990s, urbanisation increased rapidly. 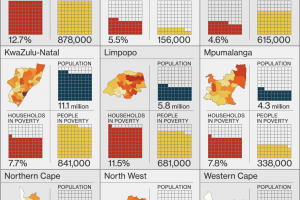 By South Africa gateway on 9 September 2018

The Eastern Cape is South Africa’s poorest province, both in its percentage of poor households and the number of its people who live in poverty. The province with the smallest share of households in poverty is the Western Cape.