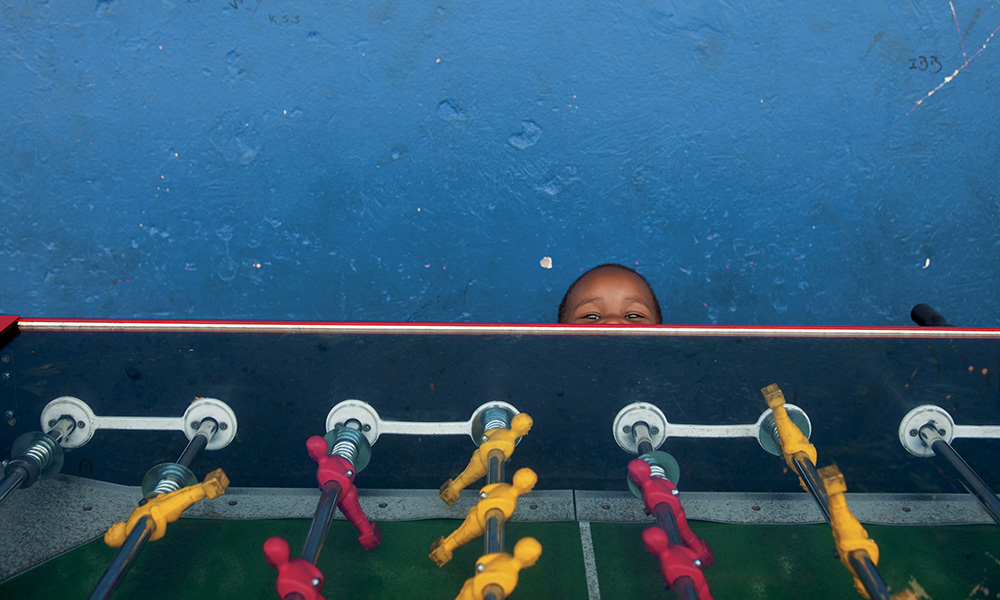 A child plays in a local restaurant in Vosloorus, a large township in Gauteng province. (Media Club)

The country has the fourth-largest population in Africa – after Nigeria, Ethiopia and Egypt – and the 25th-largest in the world. 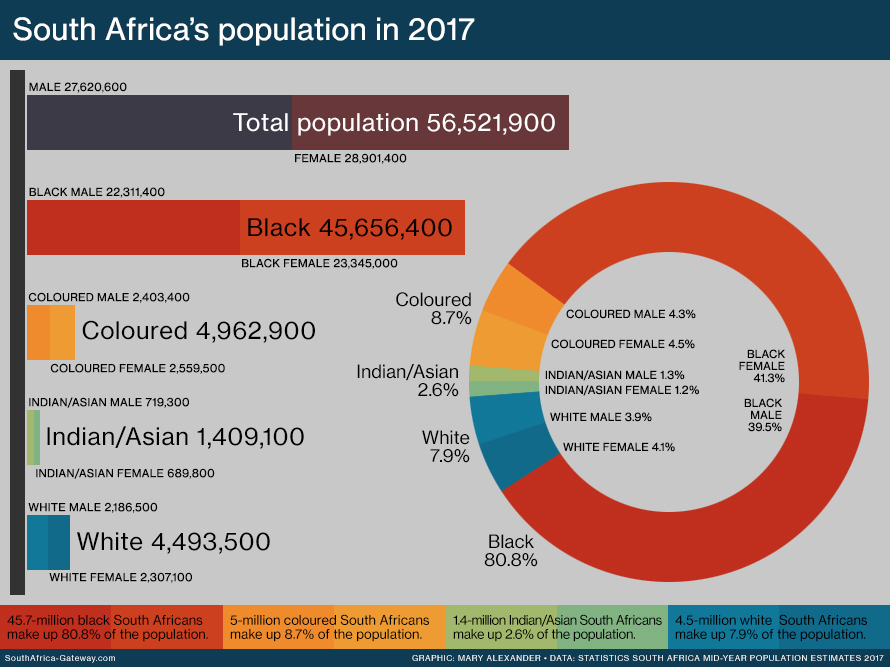 These ratios have changed slightly since the country held its last census, in 2011. The proportion of black people has increased, that of coloured and Indian South Africans has stayed the same, and the percentage of white people has shrunk.

Population of the provinces

The population of each of South Africa’s provinces varies enormously. 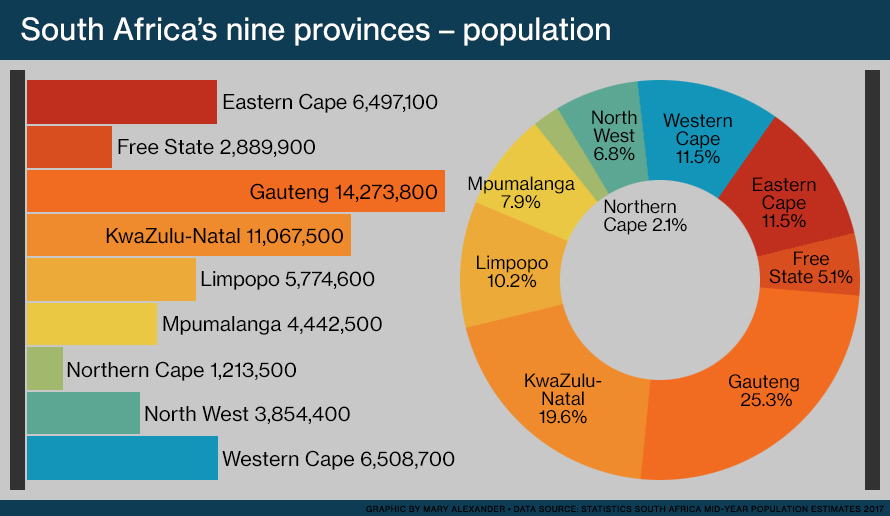 The most striking difference is between Gauteng and the Northern Cape. Gauteng is a city region of just 18,178 square kilometres, 1.4% of South Africa’s land area, yet it’s home to over a quarter of the country’s people. The Northern Cape takes up almost a third of South Africa, but it is a region of arid wilderness and hardscrabble farmland in which only 2.1% of the population live.

Then there’s KwaZulu-Natal, home to almost a fifth of the population, and the Free State, home to only 5%.

In 2017 South Africa’s provincial populations, and their share of the total, were: 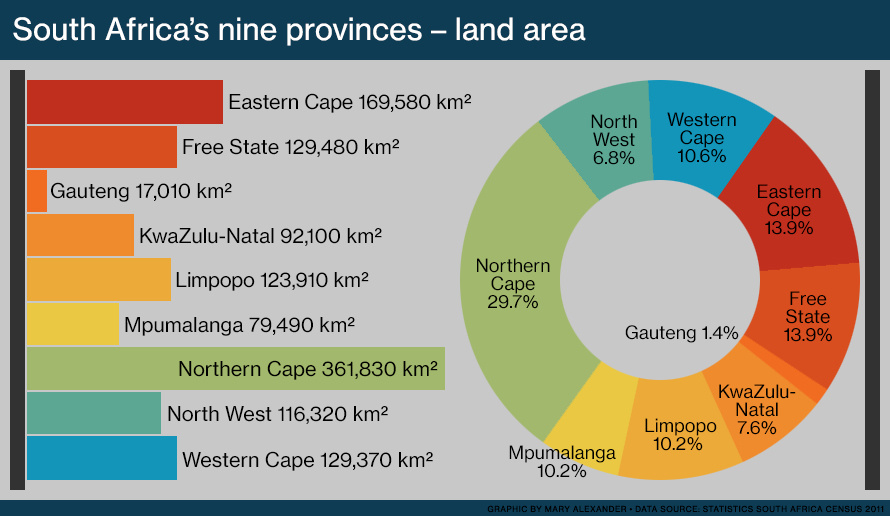 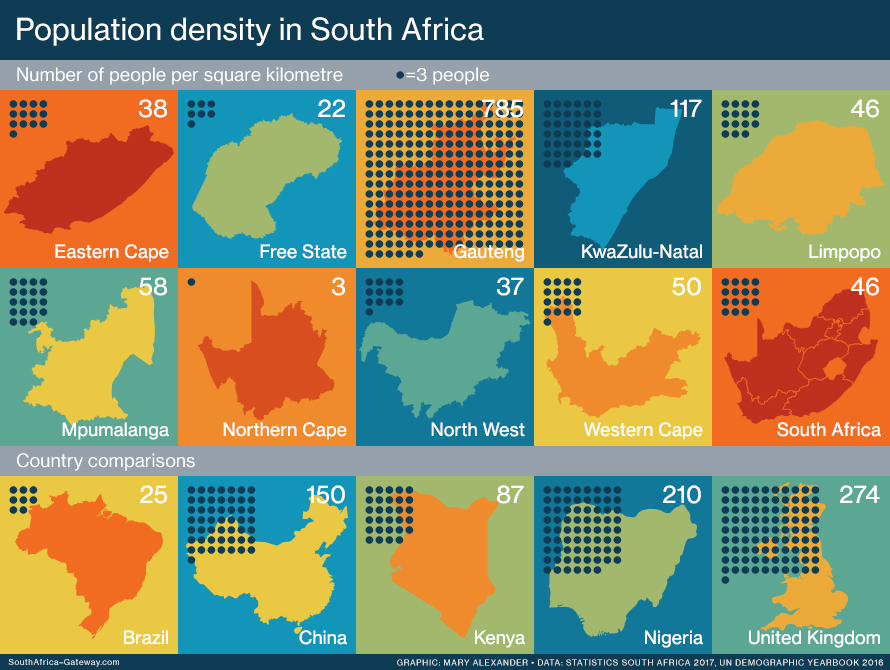 In 2017, South Africans’ life expectancy at birth is an estimated 64 years – 66.7 years for females and 61.2 years for males. This is up from around 55 years in 2002, before any serious effort to tackle the HIV and Aids epidemic began.

Statistics South Africa estimates the country’s overall HIV prevalence rate at about 12.6%. In 2017, the total number of people living with HIV was some 7-million. About 18% of adults aged 15 to 49 are HIV-positive. 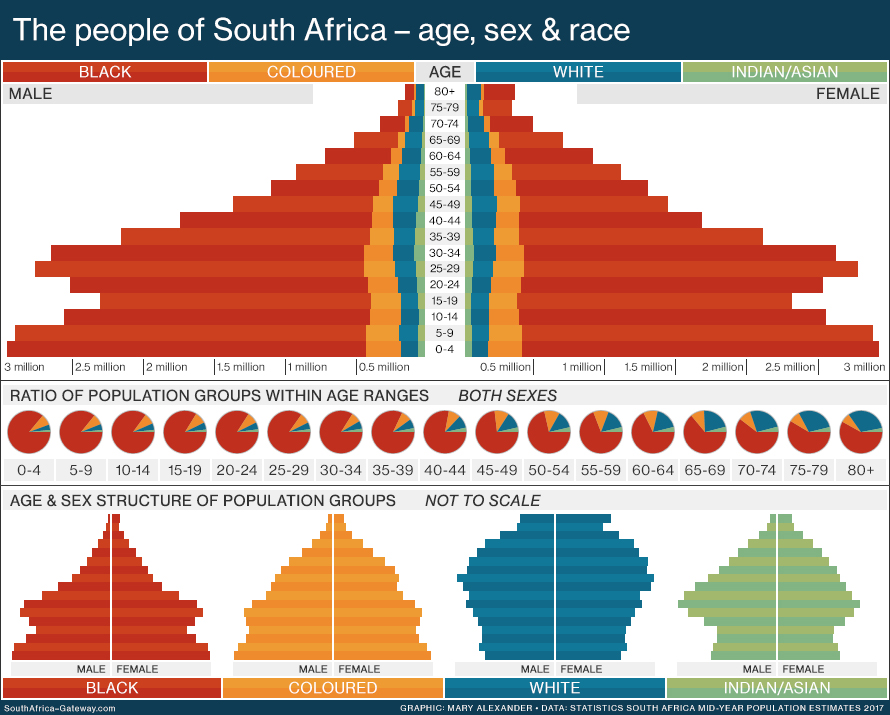 Some 16.7-million South Africans are 15 or younger – nearly a third of the population. The provinces with the highest proportion of children are Limpopo, where 35.2% of the population is under 15, the Eastern Cape (33.6%) and KwaZulu-Natal (31.9%).

South Africans aged 60 years or older number 4.6-million people, making up 8.1% of the total. The country’s older population has steadily increased over the last few decades as South Africans live longer. The provinces with the highest proportion of people aged 60 or older are the Eastern Cape (9.9%), the Northern Cape (9.8%) and the Western Cape (9.1%).

The Eastern Cape is South Africa’s poorest province with the highest rate of outward migration to other provinces. This leaves it with the highest proportion of both children and the elderly, as working-age people leave for elsewhere to find jobs.

South Africa’s population structure reveals facts of history and continued inequality. While black South Africans are in the majority in every age group, this majority decreases as the age of the population rises. Coloured, Indian and especially white South Africans tend to live longer.

The benefits of increasing economic opportunity, extensive social welfare and access to healthcare since democracy in 1994 are shown by the fact that the population structure remains pretty much unchanged from age zero to about 39 – people born from 1978 onwards.

South Africans migrate away from poverty to where the jobs are. They move from poorer provinces to the richer ones, and from rural areas to the cities.

Gauteng is South Africa’s wealthiest province, mostly a city region and the centre of the country’s economy. It has the largest population, constantly swelled by migration – its net migration rate (number of people moving in minus people moving out) was nearly a million between 2011 and 2016.

The Eastern Cape is the poorest province. Between 2011 and 2016 nearly half a million of its people migrated to other provinces, while only 170 000 or so moved into the province.

South Africa’s international migration rates tend to be positive – more people move here, particularly from the rest of Africa, than leave. Between 2011 and 2016 net migration of black Africans to South Africa was 940 352 people, and a further 1.1-million is expected between 2016 and 2021.

The exception is in the white population. A total of 108 269 more white people emigrated out of South Africa than immigrated here in the five years from 2011 to 2016. Statistics South Africa estimates that between 2016 and 2021 a further 112 740 people will be added to the outflow of white people from South Africa.

These have revealed a growing population, and a significant if not dramatic shift in the country’s racial profile. In the 15 years between the 1996 and 2011 censuses, the total population has increased by 11.2-million people. 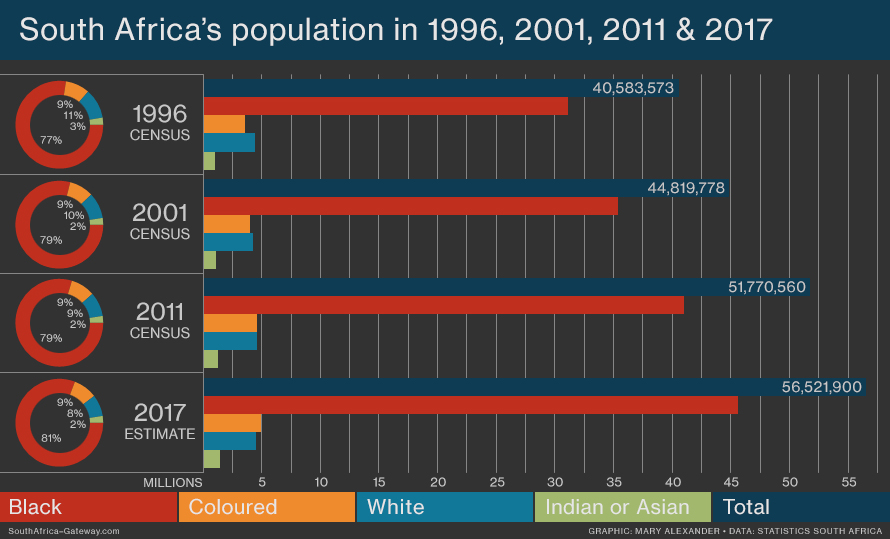 Trends in South Africa’s population from 1960

There’s a lot of talk of South Africa’s population being dominated by the youth. But as the graphic below shows, we’re less youthful than we have been for decades. 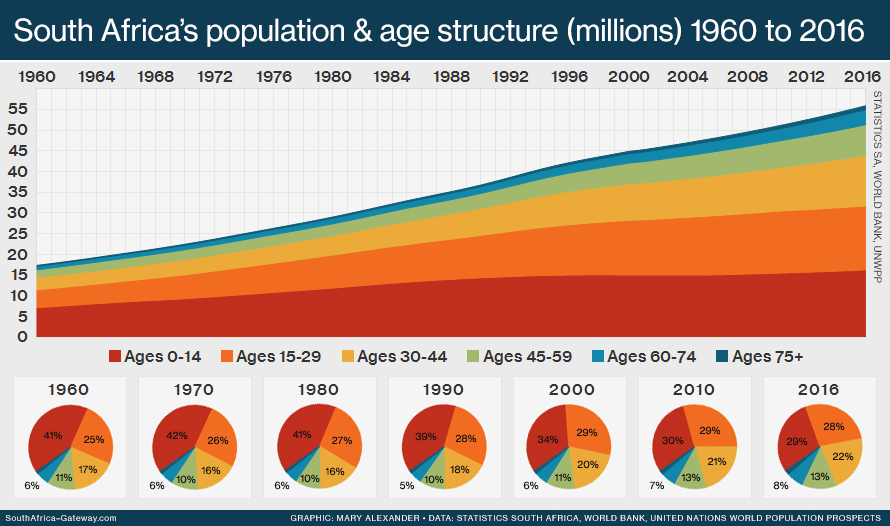 The end of apartheid, better healthcare, widespread social welfare and greater economic opportunities all mean South Africans are now able to live longer lives – reducing the proportion of children and youth in our total population. See the actual figures for selected years.

From 1960 to the late 1980s, apartheid laws kept families and communities in poor rural areas. Young men alone were allowed to move to the cities, where their labour was valuable. 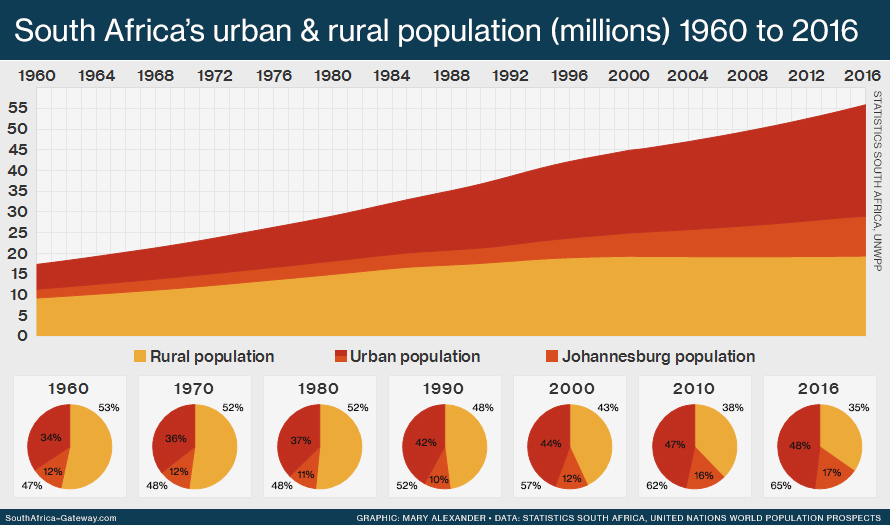 After the end of apartheid, from the mid-1990s, urbanisation increased rapidly. In the last 20 years, much of the migration from rural areas has been to Johannesburg, which has been South Africa’s largest city since 1950.

Charting South Africans’ life expectancy is to track the country’s modern history. In 1960, a time of terrible apartheid abuse, an average newborn child was expected to have a lifespan of only 52 years – 50 years for boys. In 2015, life expectancy was 62 years.

In between, life expectancy has risen and fallen. The most severe drop was during the crisis of the HIV and Aids epidemic, from 1995 to 2005. In 2005, life expectancy was the same as it had been in 1960.

The death rate of children is the starkest indicator of the health of a country’s society and economy. In 1974 South Africa’s mortality rate – deaths per 1,000 live births – was 88.1 for infants under a year and 125.5 for under-fives. By 2016 it had dropped to 34.2 for infants and 43.3 for under-fives – the lowest rate yet recorded.