History overlooks the role he played in the protests that led to the 1960 Sharpeville Massacre, and the first global condemnation of the apartheid state. 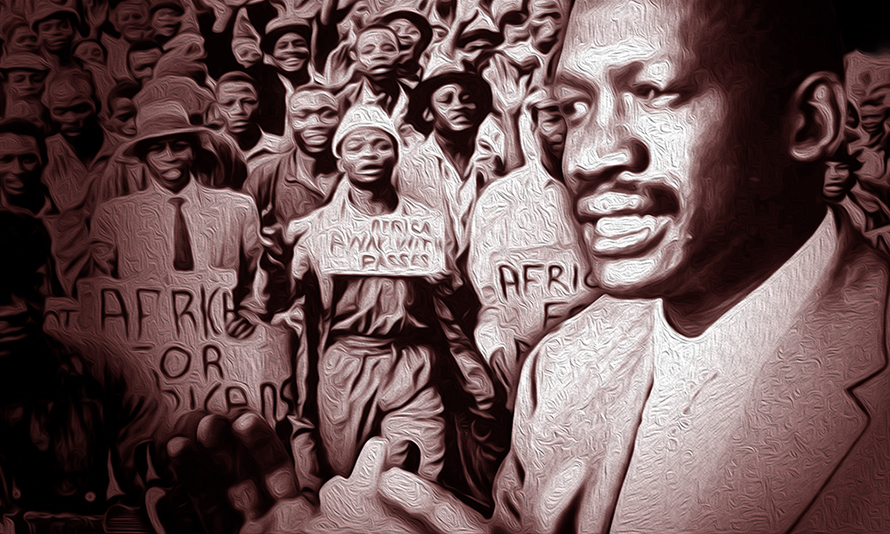 “The Africanists take the view that there is only one race to which we all belong, and that is the human race,” Robert Sobukwe said. “In our vocabulary therefore, the word ‘race’, as applied to man, has no plural form.”

Sobukwe was an academic, a lawyer, a lyrical writer and a persuasive orator. He helped found the Pan-Africanist Congress and was one of the first to propose a “nonracial” rather than “multiracial” future for South Africa. For a time, apartheid authorities regarded Sobukwe as more dangerous than leaders like Nelson Mandela.

In 1960, as president of the newly formed PAC, Sobukwe was key in organising protests against the pass laws.

The “dom pas” (literally, dumb pass) was a document all black South Africans had to carry to allow them “pass” into the cities – places many had lived all their lives.

In the late 1950s, the pass laws had been extended to include black women. Both the PAC and the ANC responded with nationwide civil disobedience campaigns.

On the morning of 21 March 1960, Sobukwe left his home in Mofolo, Soweto, to lead a small crowd on an eight-kilometre march to Orlando police station.

The crowd had one goal. To be arrested.

The pass laws made every black man and woman in the country a potential criminal – simply for being somewhere without the right documents.

Sobukwe and his comrades were trying to expose the absurdity of those laws by forcing the authorities to arrest, well, everyone. The hope was that with this many “criminals” to process, the pass law system would break down.

Just days before, Sobukwe had resigned his post as a lecturer at the University of the Witwatersrand and made arrangements for the safety of his family.

A week earlier he had also written to South Africa’s commissioner of police, Major-General Rademeyer, informing him that the PAC would be holding a five-day, non-violent and disciplined protest against the pass laws.

As Sobukwe and his followers approached Orlando police station, they were arrested – as they expected.

What few expected was that 21 March 1960 would be Robert Sobukwe’s last taste of freedom.

Sobukwe was so feared by the apartheid government that he would spend the rest of his life in prison and, later, in internal exile under house arrest.

On the same day, about 70 kilometres to the south, in the township of Sharpeville outside Vereeniging, other tragic events were unfolding.

As a crowd of 5,000 peaceful protesters organised by the PAC approached the local police station, police opened fire.

Sixty-nine people were killed and more than 200 wounded, many of them shot in the back.

The Sharpeville Massacre, as it became known, was a turning point in South Africa’s history.

It made headlines across the world and sharply intensified international pressure on the apartheid state.

In its aftermath the government imposed a state of emergency, banning both the ANC and PAC as illegal organisations and detaining 18,000 people.

The liberation movements responded by abandoning passive resistance for military struggle, with the ANC forming its armed wing Umkhonto we Sizwe, and the PAC its armed wing Poqo.

On 1 April 1960, the United Nations Security Council passed Resolution 134 after a complaint by 29 member states regarding “the situation arising out of the large-scale killings of unarmed and peaceful demonstrators against racial discrimination and segregation in the Union of South Africa”.

The resolution voiced the council’s anger at the policies and actions of the South African government, and called on the government to abandon apartheid.

With world authority behind it, UN Resolution 134 became a powerful weapon for the international anti-apartheid movement.

Robert Mangaliso Sobukwe was born on 5 December 1924 in an apartheid-era “township”, a type of settlement in which black people were forced to live, outside the town of Graaff-Reinet in today’s Eastern Cape province.

The youngest of six children, his family was poor, celebrating Christmas with only a new suit of clothes for each child – the only clothes bought during the year.

His father Hubert was a labourer and his mother Angelina a cleaner and cook at a local hospital. Both parents encouraged their children to pursue education, an education Sobukwe’s parents had been denied.

Sobukwe’s education followed the pattern of Nelson Mandela and other African intellectuals of the time.

Like Mandela, he went to high school at the Healdtown Institute, where he rose to be head boy. He then, like Mandela, went on to the University of Fort Hare, enrolling in 1947.

At university, Sobukwe registered for a Bachelor of Arts in English – he had a passion for poetry and drama – as well as Xhosa and Native Administration.

Before Fort Hare he had little time for politics, but his Native Administration studies sparked his interest and set the path for his life.

In 1948 Sobukwe joined the African National Congress Youth League (ANCYL) on campus, and a year later was elected president of the Fort Hare Students’ Representative Council (SRC), where he revealed his talents as a leader and powerful orator. His speech as outgoing SRC president in October 1949 gave a taste of things to come:

Let me plead with you, lovers of my Africa, to carry with you into the world the vision of a new Africa, an Africa reborn, an Africa rejuvenated, an Africa recreated, a young Africa. We are the first glimmers of a new dawn. And if we are persecuted for our views, we should remember, as the African saying goes, that it is darkest before dawn, and that the dying beast kicks most violently when it is giving up the ghost.

After university, Sobukwe took a teaching job in Standerton in today’s Mpumalanga province.

During this time he became increasingly influenced by the writings of veteran ANC leader, lawyer and academic Anton Lembede, and started to adopt a more Africanist position in the organisation.

‘Race has no plural’

In 1954 Sobukwe was appointed lecturer in African Studies at the University of the Witwatersrand – earning him the nickname “the Prof” among his friends and fellow activists – and settled his family in Mofolo, Soweto, south of Johannesburg.

He joined the local ANC but was increasingly critical of what he saw as the organisation’s “liberal-left-multiracialist” policies.

Sobukwe’s antagonism to “multiracialism” – as opposed to “non-racialism” – and his Africanist philosophy came directly out of his appreciation of the absurdity of “race” as a real thing. He set out this view in a famous speech in 1959:

The Africanists take the view that there is only one race to which we all belong, and that is the human race. In our vocabulary therefore, the word “race”, as applied to man, has no plural form.

Against multi-racialism we have this objection, that the history of South Africa has fostered group prejudices and antagonisms, and if we have to maintain the same group exclusiveness, parading under the term of multiracialism, we shall be transporting to the new Africa these very antagonisms and conflicts.

Further, multiracialism is in fact a pandering to European bigotry and arrogance. It is a method of safeguarding white interests, implying as it does, proportional representation irrespective of population figures. In that sense it is a complete negation of democracy. 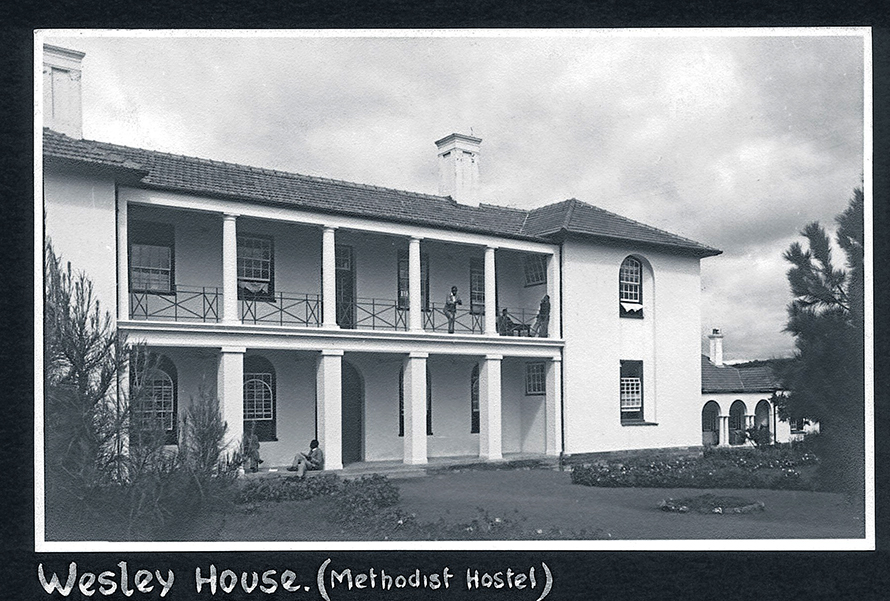 Wesley House, the Methodist hostel at the University of Fort Hare where Robert Sobukwe likely stayed during his studies.

As an Africanist, Sobukwe was also a strong advocate for the political unity of the African continent, particularly in the context of the Cold War:

We regard it as the sacred duty of every African state to strive ceaselessly and energetically for the creation of a United States of Africa, stretching from Cape to Cairo, Morocco to Madagascar.

The days of small, independent countries are gone.

The pan-African movement was inspired by Kwame Nkrumah, the first president of Ghana, the first African state to gain independence.

Dr Kwame Nkrumah has repeatedly stated that in international affairs, Africa wishes to pursue a policy of positive neutrality, allying herself to neither of the existing blocs but … remaining ‘independent in all things but neutral in none that affect the destiny of Africa’.

It is not the intention of African states to change one master (western imperialism) for another (Soviet hegemony).

In 1957 Sobukwe became editor of the well-regarded newspaper The Africanist, using it as an increasingly critical platform against the ANC’s domination by “liberal- left-multiracialists”. A year later he was instrumental in initiating an Africanist breakaway from the ANC, helping form the Pan Africanist Congress and becoming its first president.

Robert Sobukwe (front row, second from left) with the other founding members of the Pan Africanist Congress in 1957.

Solitary confinement and the Sobukwe Clause

After his arrest on 21 March 1960, Sobukwe was sentenced to three years in prison. He refused the help of an attorney, and would not appeal the sentence, on the grounds that the court had no jurisdiction over him as it was not a court of law or justice.

Just as his three-year term was up the South African government passed the General Law Amendment Act on 3 May 1963, which contained a special clause allowing the minister of justice to prolong the imprisonment of any political prisoner indefinitely.

The Sobukwe Clause, as it became known, was only ever applied to Robert Sobukwe.

Sobukwe was moved to Robben Island, where he served a further six years in solitary confinement.

He had separate living quarters and was denied contact with other prisoners. But he was allowed books and study materials, and during this time earned a degree in Economics from the University of London.

In 1964, a year after his sentence was supposed to have ended, Sobukwe was offered a job by the National Association for the Advancement of Coloured People in the US.

But John Vorster, then the minister of justice and later prime minister of South Africa, refused to allow him to leave the country. 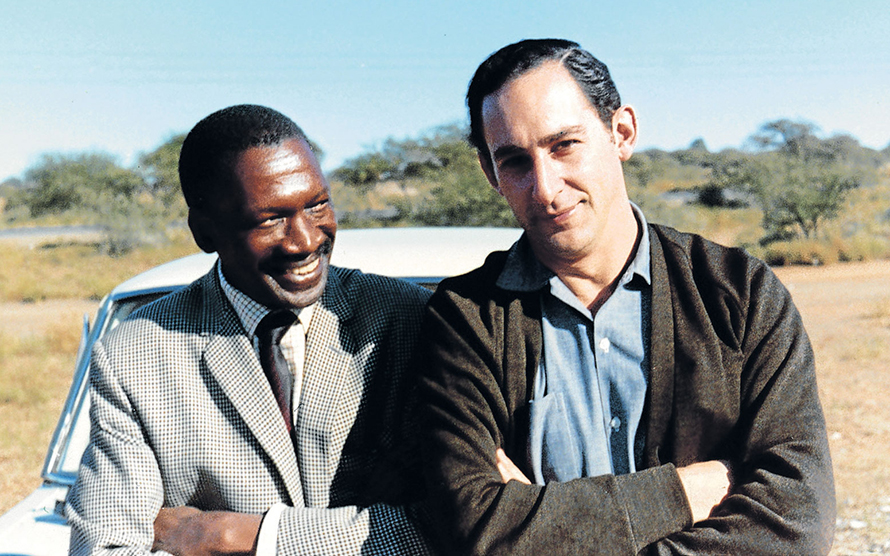 Robert Sobukwe with his friend Benjamin Pogrund after Sobukwe’s release from Robben Island in 1969. Pogrund, a journalist, is the author of the biography Robert Sobukwe – How can Man Die Better.

Sobukwe was finally released from jail in May 1969, but banished to the dusty township of Galeshewe outside Kimberley, in today’s Northern Cape province – a place some 500 kilometres equidistant from both Johannesburg and Sobukwe’s home town of Graaff Reinet.

There he was held under house arrest for 12 hours a day, and forbidden from taking part in any political activity.

In 1970 Sobukwe was again offered a job in the US, this time at the University of Wisconsin.

While under house arrest Sobukwe studied law, completing his articles in Kimberley and opening his own legal practice in 1975. But soon after, he fell ill.

In July 1977 he applied for permission to seek treatment in Johannesburg. He was diagnosed with advanced lung cancer.

Despite his failing health, the government deliberately made it hard for Sobukwe to get the treatment he needed by insisting he comply with the conditions of his restrictions.

On 27 February 1978 he died from lung complications at Kimberley General Hospital. He was buried in Graaff Reinet, the town of his birth.

We aim, politically, at government of the Africans by the Africans, for the Africans, with everybody who owes his only loyalty to Africa and who is prepared to accept the democratic rule of an African majority being regarded as an African.

Here is a tree rooted in African soil, nourished with waters from the rivers of Africa.