It took one day for young South Africans to change the course of the country’s history. The day was 16 June 1976. Here’s an hour-by-hour account of the 1976 Soweto students’ uprising. 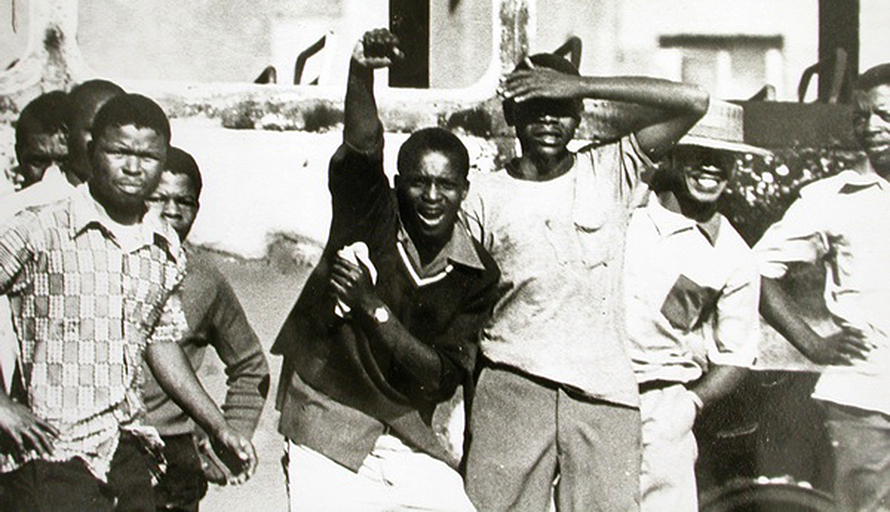 By 1976 the frustration had been building for a generation. Young black South Africans had become aware that the apartheid plan was to deny them a real education. 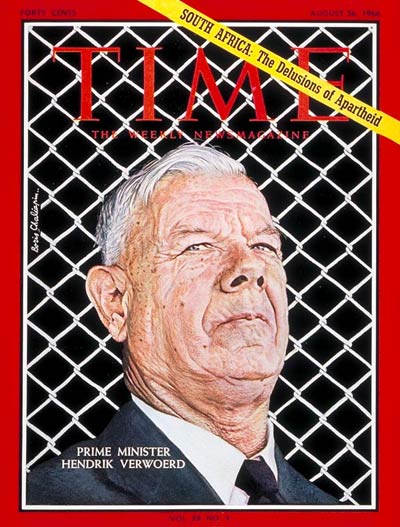 Hendrik Verwoerd on the cover of Time magazine, 26 August 1966. (Time)

In 1953, five years after the National Party was elected on the platform of apartheid, the government passed the Bantu Education Act. This gave the central government total control of the education of black South Africans, and made independent schools for black children illegal.

The aim was simple: ensuring a stable and plentiful source of cheap labour. Black people would be educated only to the point where they were a useful but unthreatening (to white workers) workforce at the foundation of an economy built to only benefit white people.

A notorious quote by Hendrik Verwoerd, a National Party prime minister known as the “architect of apartheid”, makes the intention of the Act clear.

“There is no place for [the black person] in the European community above the level of certain forms of labour,” Verwoerd said in a 1954 speech, when he was still Minister of Native Affairs.

“For that reason it is of no avail for him to receive a training which has as its aim absorption in the European community while he cannot and will not be absorbed there. Up till now he has been subjected to a school system which drew him away from his own community and partically [sic] misled him by showing him the green pastures of the European but still did not allow him to graze there.”

Before the Act, South Africa had a rich tradition of independent mission schools. The education enjoyed by Nelson Mandela, Robert Sobukwe, Oliver Tambo, Govan Mbeki and many others allowed them to become some of the best minds in the country.

The apartheid government wanted cheap labour, but it also wanted to end the threat posed by bright African minds. Mission schools were closed, and universities such as Fort Hare had their high academic standards chopped to a stump. 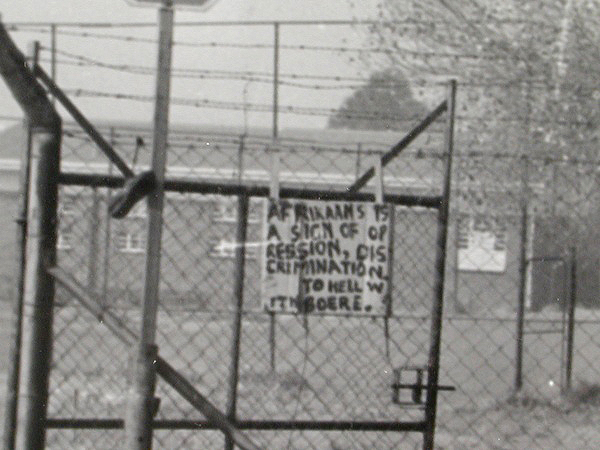 A 1976 student’s poster on a fenced-in Soweto school reads: “Afrikaans is a sign of oppression, discrimination. To hell with Boere.” (Doing Violence to Memory: The Soweto Uprising)

No education – in three languages?

By 1976 young black people’s frustration with their education, and the bleak future it offered, was ready to explode. The fuse was lit when the government proposed to introduce Afrikaans as the language of teaching.

Black South Africans spoke their own languages. These had already been ignored in their education. English had long been the medium of instruction – their second language – and was a language most urban young black people were at least familiar with. Now the authorities wanted the people they had denied an education to learn a third language.

Two of the many placards produced by students during the uprising (later confiscated and photographed by the police) highlight their antagonism to Afrikaans. The placards were written in English, the students’ second language. (Doing Violence to Memory: The Soweto Uprising)

People who speak three languages are considered to be highly educated. These young people, given a rudimentary government education, were getting by in English. But almost none of them knew Afrikaans well enough to be taught in it, let alone write exams in the language.

Afrikaans was also the language of the oppressor. Today most of the people who speak Afrikaans aren’t white, but in the 1970s the language was still associated with Afrikaner nationalism, the ideology of the National Party, the nationalism of white Afrikaans-speaking people.

The protest is well organised. It is to be conducted peacefully. The plan is for students to march from their schools, picking up others along the way, until they meet at Uncle Tom’s Municipal Hall. From there they are to continue to Orlando Stadium.

A photographer in a police helicopter captured this view of the students’ march, before the shooting started. (Doing Violence to Memory: The Soweto Uprising)

Students gather at Naledi High. The mood is high-spirited and cheerful. At assembly the principal gives the students his support and wishes them good luck.

Before they start the march, Action Committee chairperson Tebello Motopanyane addresses the students, emphasising that the march must be disciplined and peaceful.

On the way they pass other schools and numbers swell as more students join the march. Some Soweto students are not even aware that the march is happening.

“The first time we heard of it was during our short break,” said Sam Khosa of Ibhongo Secondary School. “Our leaders informed the principal that students from Morris Isaacson were marching. We then joined one of the groups and marched.”

There are eventually 11 columns of students marching to Orlando Stadium – up to 10 000 of them, according to some estimates.

There have been a few minor skirmishes with police along the way. But now the police barricade the students’ path, stopping the march.

Tietsi Mashinini climbs on a tractor so everyone can see him, and addresses the crowd.

“Brothers and sisters, I appeal to you – keep calm and cool. We have just received a report that the police are coming. Don’t taunt them, don’t do anything to them. Be cool and calm. We are not fighting.”

It is a tense moment for police and students. Police retreat to wait for reinforcements. The students continue their march.

Here everything changed. There have been different accounts of what started the shooting.

The atmosphere is tense. But the students remain calm and well-ordered.

Suddenly a white policeman lobs a teargas canister into the front of the crowd. People run out of the smoke dazed and coughing. The crowd retreats slightly, but remain facing the police, waving placards and singing.

Police have now surrounded the column of students, blocking the march at the front and behind. At the back of the crowd a policeman sets his dog on the students. The students retaliate, throwing stones at the dog.

A policeman at the back of the crowd draws his revolver. Black journalists hear someone shout, “Look at him. He’s going to shoot at the kids.” 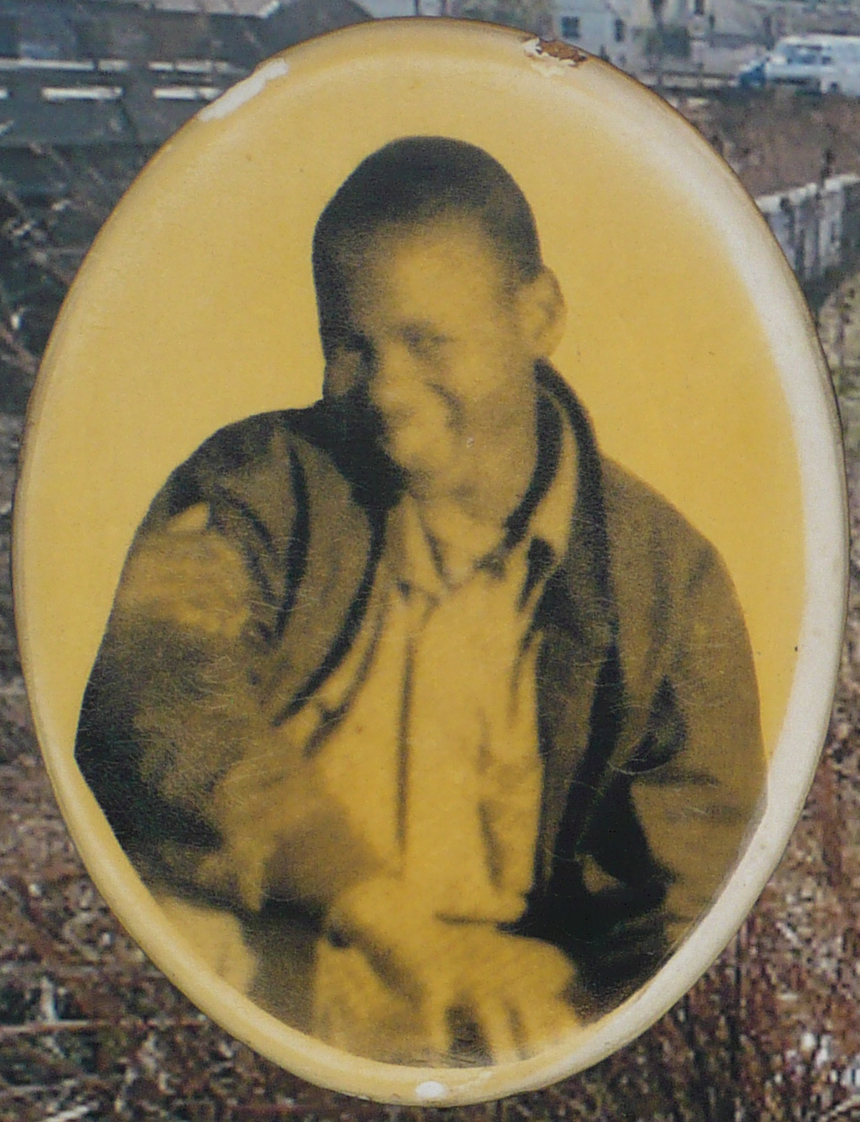 The only picture we have of Hastings Ndlovu is from his tombstone. Here it is used on the information board at the Hastings Ndlovu memorial site in Orlando West in Soweto.

A single shot rings out. Hastings Ndlovu, 17 years old (other sources say 15), is the first to be shot. He dies later in hospital.

After the first shot, police at the front of the crowd panic and open fire.

Twelve-year-old Hector Pieterson collapses, fatally injured. He is picked up and carried by Mbuyisa Makhubo, a fellow student, who runs towards Phefeni Clinic. Pieterson’s crying sister Antoinette Sithole runs alongside. The moment is immortalised by photographer Sam Nzima, and the image becomes an emblem of the uprising.

There is pandemonium in the crowd. Children scream. More shots are fired. At least four students have fallen to the ground. The rest run screaming in all directions.

Dr Malcolm Klein, a coloured doctor in the trauma unit at Baragwanath Hospital, is on his break when a nurse summons him, distress on her face.

“I followed her and was met by a grisly scene: a rush of orderlies wheeling stretchers bearing the bodies of bloodied children into the resuscitation room,” he recalled later. “All had the red ‘Urgent Direct’ stickers stuck to their foreheads …

“I stared in horror at the stretcher bearing the body of a young boy in a neat school uniform, a bullet wound to one side of his head, blood spilling out of a large exit wound on the other side, the gurgle of death in his throat. Only later would I learn his name: Hastings Ndlovu.”

Anger at the killings sparks retaliation.

Buildings and vehicles belonging to the government’s West Rand Administrative Buildings are set alight. Bottle stores are burned and looted.

More students are killed by police, particularly in encounters near Regina Mundi Church in Orlando and the Esso garage in Chiawelo. As students are stopped by the police in one area, they move their protest action elsewhere.

By the end of the day most of Soweto has felt the impact of the protest.

Schools close early, at about noon. Many students, so far unaware of the day’s events, walk out of school to a township on fire. Many join the protests. The uprising gains intensity.

Official figures put the death toll for 16 June at 23 people killed. Other reports say it was at least 200.

Most of the victims are under 23, and many shot in the back. Many more survive with disabling injuries.

The uprising spreads across South Africa. By the end of the year about 575 people have died across the country, 451 at the hands of police.

International solidarity movements are roused as an immediate consequence of the revolt. They soon give their support to the students, putting pressure on the apartheid government to temper its repressive rule. Many students leave South Africa to join the exiled liberation movements.

This pressure is maintained through the 1980s, until resistance movements are finally unbanned in 1990. Four years later, on 27 and 28 April 1994, South Africa holds its first democratic elections.

Additional information – particularly the memories of Baragwanath Hospital trauma doctor Malcolm Klein – sourced from “The Soweto Uprising – Part 1” by Sifiso Mxolisi Ndlovu, in chapter 7 of The Road to Democracy in South Africa Volume 2, published by the South African Democracy Education Trust. Many events omitted from this timeline are to be found in this comprehensive and moving account. The chapter can be downloaded in PDF.

Researcher Helena Pohlandt-McCormick has made a wealth of testimony, photos and documents about the 1976 student uprising available online. Browse her outstanding archive Doing Violence to Memory: The Soweto Uprising.