There’s more to images of Africa than giraffes and sunsets. It’s the second-largest continent on earth. Its 30 million square kilometres encompass more wonders than you could ever hope to see: 55 countries, cities and farmlands, deserts and rainforests, snowy mountains and deep salted basins, and a fascinating history – of both humanity and geology – visible from space.

Etosha pan in Namibia: remnant of an ancient lake 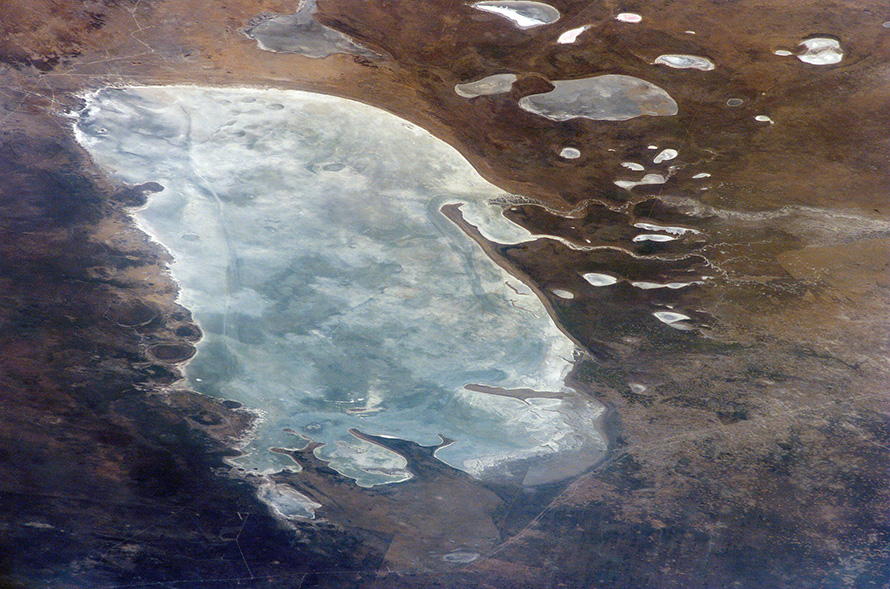 The Etosha salt pan on the Ekuma River in the Kalahari Basin region of northern Namibia is a 120-kilometre (75-mile) dry lakebed in Etosha National Park. About 16,000 years ago, as the last ice age ended and ice sheets were melting across the northern hemisphere, a wetter climate in southern Africa filled Etosha Lake. Today the Kalahari is an arid desert and Etosha pan rarely covered with even a thin sheet of water. This image was captured by the International Space Station in June 2005. Click image for a larger view. (Nasa, CC BY-NC 2.0)

The eye of the Sahara 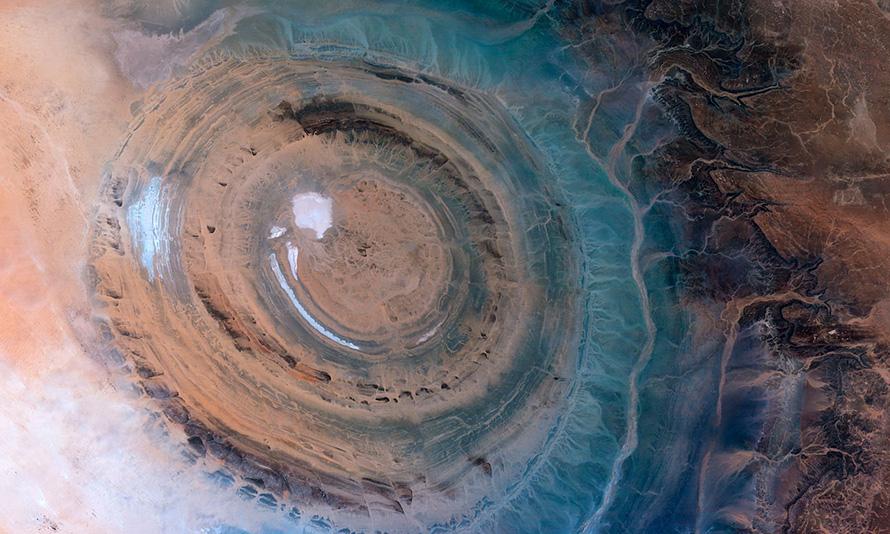 The Richat Structure near Ouadane in central Mauritania is known as the Eye of the Sahara. This magnificent 40-kilometre-wide dome is the result of deep and ancient erosion of a long-dead volcano. Click image for a larger view. (Axelspace Corporation, CC BY-SA 4.0) 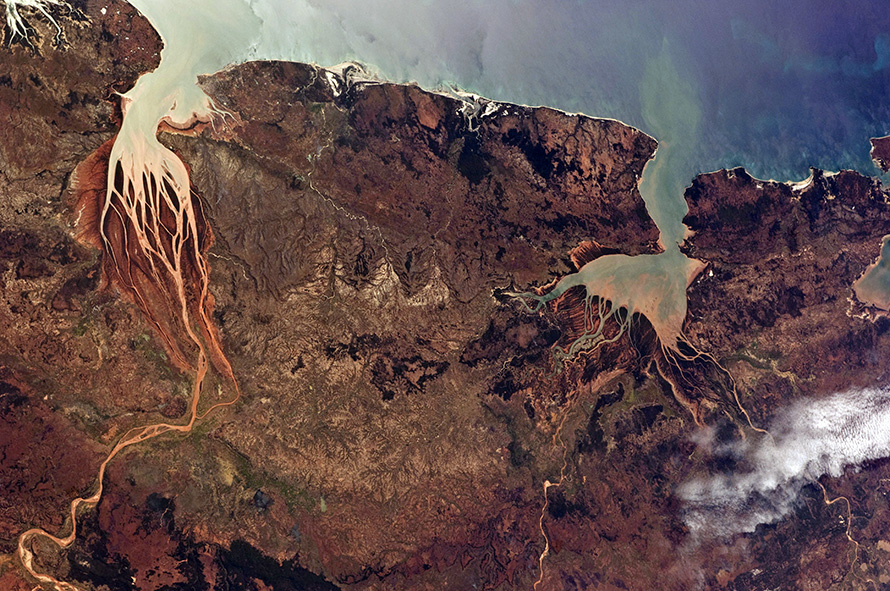 Estuaries – where the waters of seas and rivers mix – on the northwestern coast of Madagascar, a large African island in the Indian Ocean. The Mozambique Channel (top) separates Madagascar from the southeastern coast of Africa. The Betsiboka River, which flows into Bombetoka Bay (upper left), leaves striking red floodplain sediments. Mahajamba Bay (right) is fed by several rivers including the Mahajamba and Sofia. Like the Betsiboka, the floodplains of these rivers contain reddish sediments eroded from their basins upstream. Click image for a larger view. (Nasa, CC BY-NC 2.0)

Snow and ice on Mount Kilimanjaro 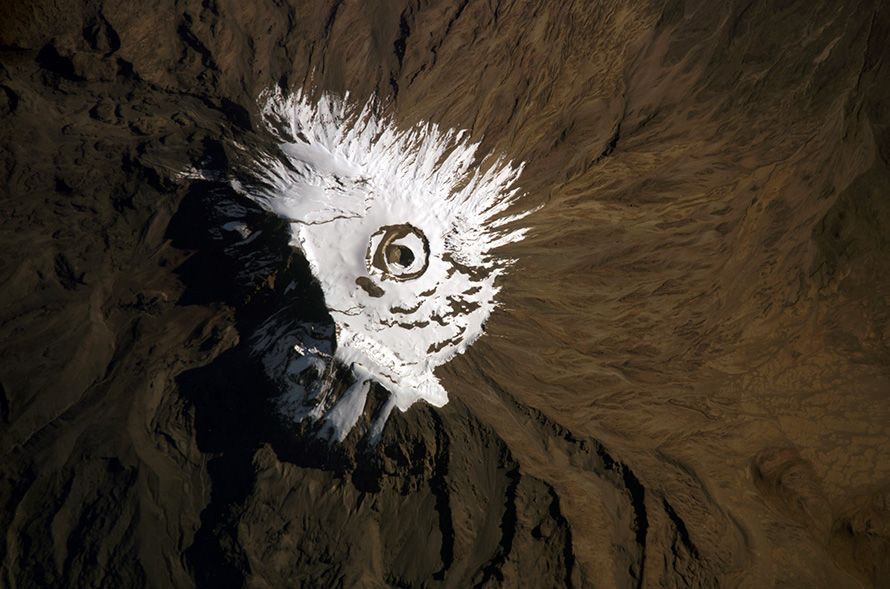 Glaciers and snow top Mount Kilimanjaro in Tanzania. A dormant volcano with three cones, Kilimanjaro is the tallest mountain in Africa. From the base to the top of the mountain is about about 4,900 metres (16,100 feet). The peak lies at 5,895 metres (19,341 feet) above sea level. This image was captured by an Expedition 14 crewmember on board the International Space Station in April 2007. Click image for a larger view. (Nasa, CC BY-NC 2.0)

The night lights of Cairo and the Nile River 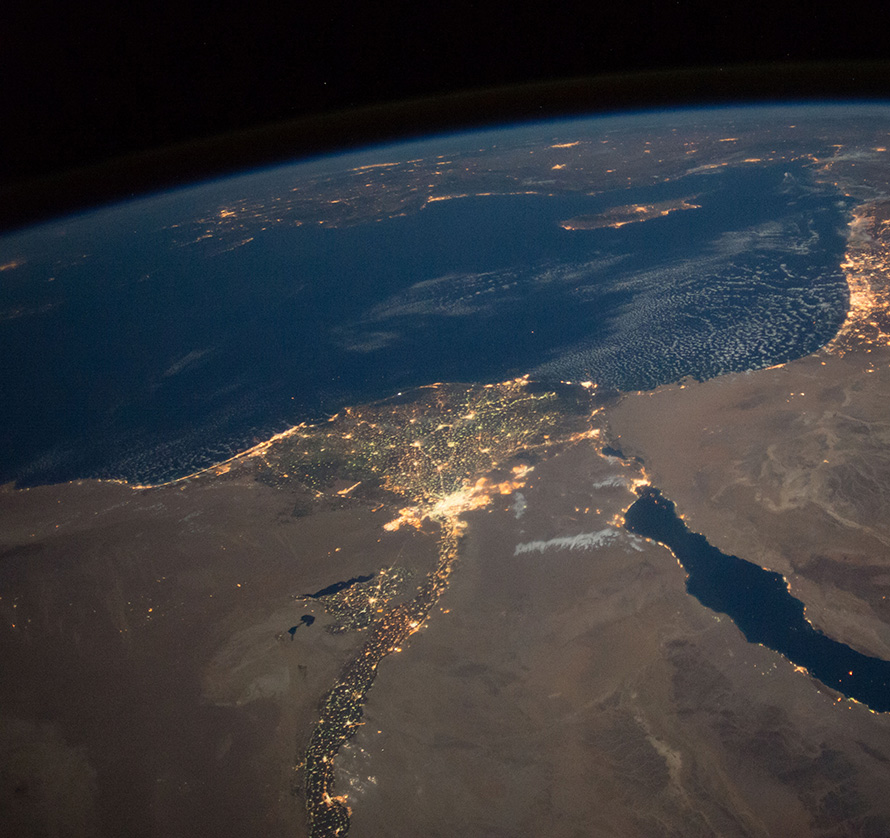 A night view of northern Egypt and the eastern Mediterranean Sea captured by the International Space Station in September 2016. The lights of the city of Cairo and settlements southwards along the Nile River can be clearly seen. Click image for a larger view. (Nasa Johnson, CC BY-NC 2.0) 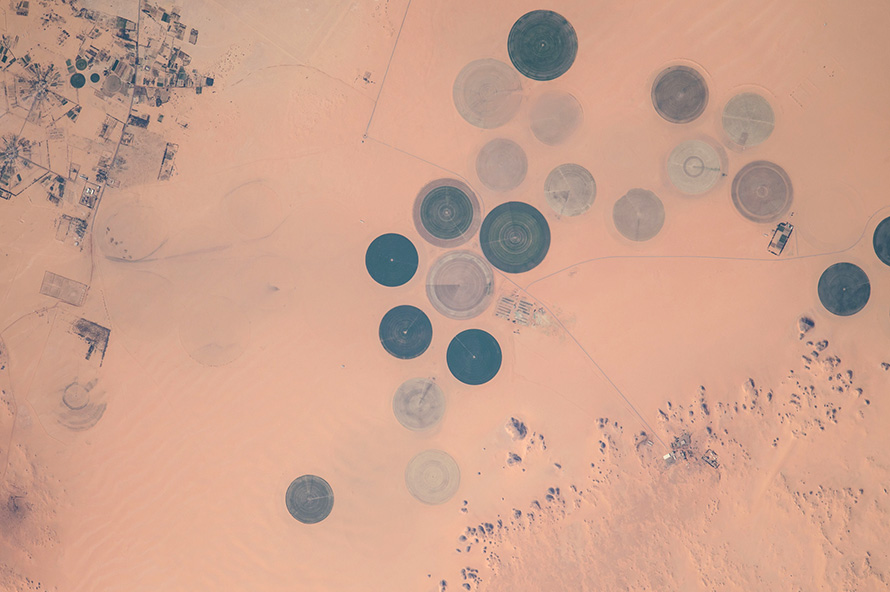 The Al-Jawf Oasis in eastern Libya photographed by the crew of the International Space Station in February 2017. The large circles in the desert sand are crops cultivated under center-pivot irrigation systems. Click image for a larger view. (Nasa Johnson, CC BY-NC-ND 2.0)

Ceuta, a Spanish city in Morocco 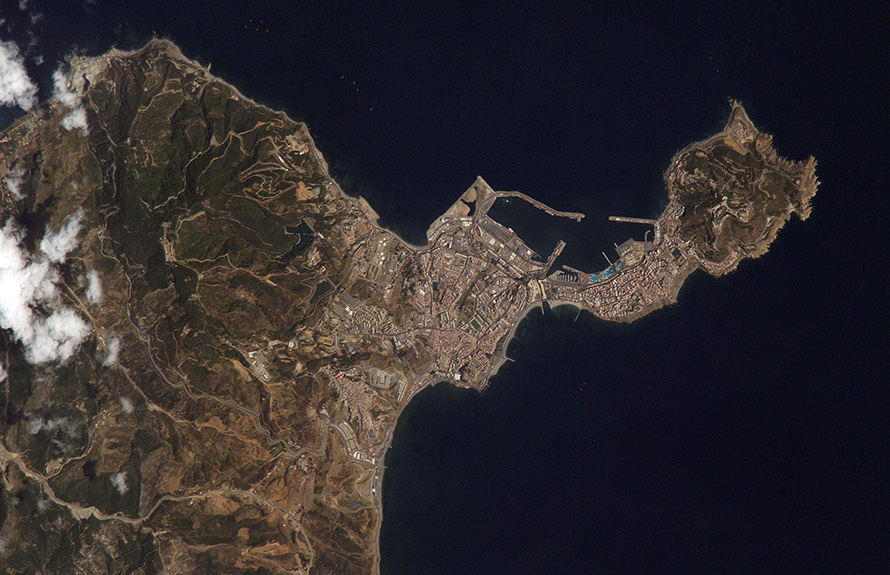 Ceuta is a Spanish city of some 85,000 people built on a narrow strip of Africa stretching into the western Mediterranean Sea. It lies on the southern coast of the Strait of Gibraltar, where the Mediterranean meets the Atlantic Ocean. This enclave of Spain in Morocco is 14 kilometres by sea from the Spanish mainland. About half the city’s population is Moroccan. Ceuta and Melilla are Spain’s two territories on the African mainland. Ceuta has a long history as a strategic trade and military point, going back to its origins in the fifth century BCE as the Carthaginian city Abyla. Click image for a larger view. (Nasa, CC BY-NC 2.0)

The Red Sea coastline in Eritrea 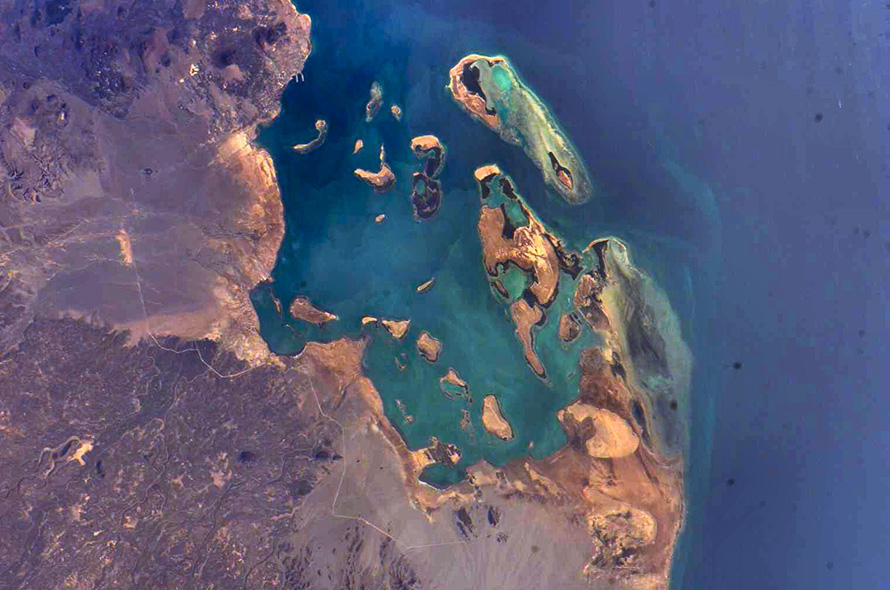 Islands and coral reefs on the Red Sea coast of Eritrea, a small country in eastern North Africa, in an image taken by a crewmember aboard the International Space Station during Expedition 13, in April 2006. Click image for a larger view. (Nasa, CC BY-NC 2.0) 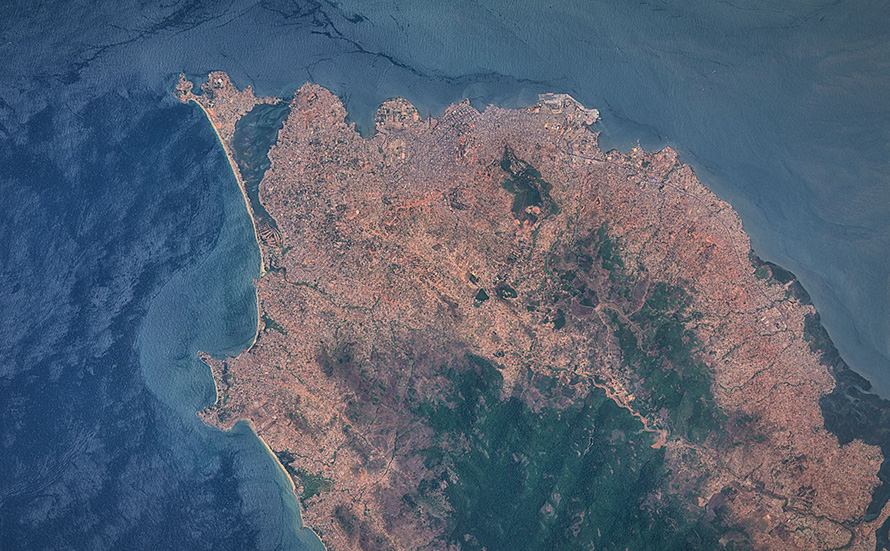 Freetown, an important West African port city and the capital of Sierra Leone, captured by Sentinel 2A satellite on 28 March 2016. Its harbour, the centre of the city’s economy, lies in the estuary of the Sierra Leone River and is one of the largest natural deep-water harbours in the world. The city of Freetown was founded in 1792 by freed African-American slaves. Click image for a larger view. (Antti Lipponen, CC BY 2.0)

The coastal waters of Guinea-Bissau 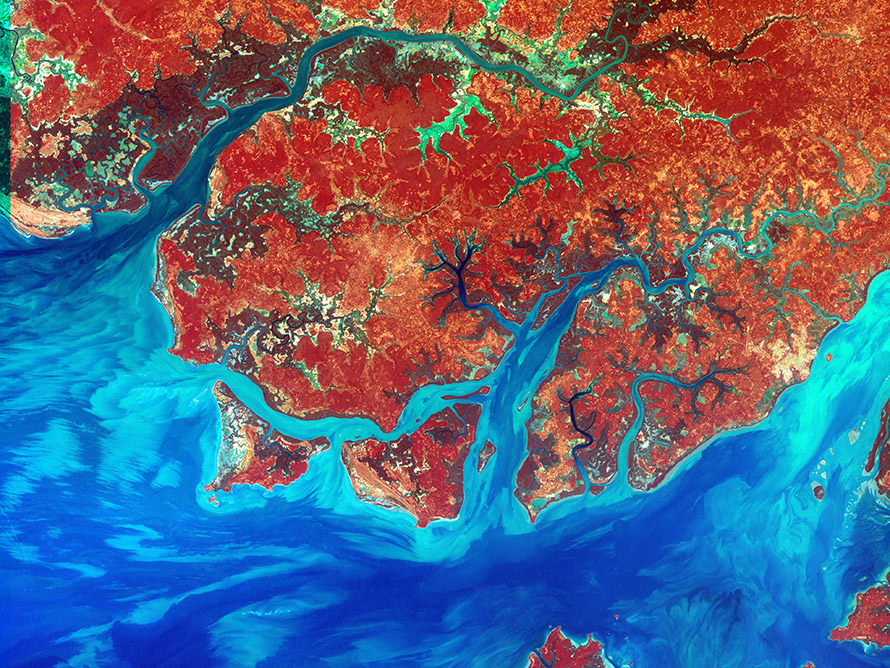 A false-colour composite satellite image of the rivers, coast and islands of Guinea-Bissau. Infrared, red and blue light wavelengths bring out details of the complex patterns of the country’s shallow coastal waters, where silt carried by the Geba and other rivers washes out into the Atlantic Ocean. Click image for a larger view. (Nasa/USGS EROS Data Center, CC BY 2.0)

Kinshasa and Brazzaville on the Congo River 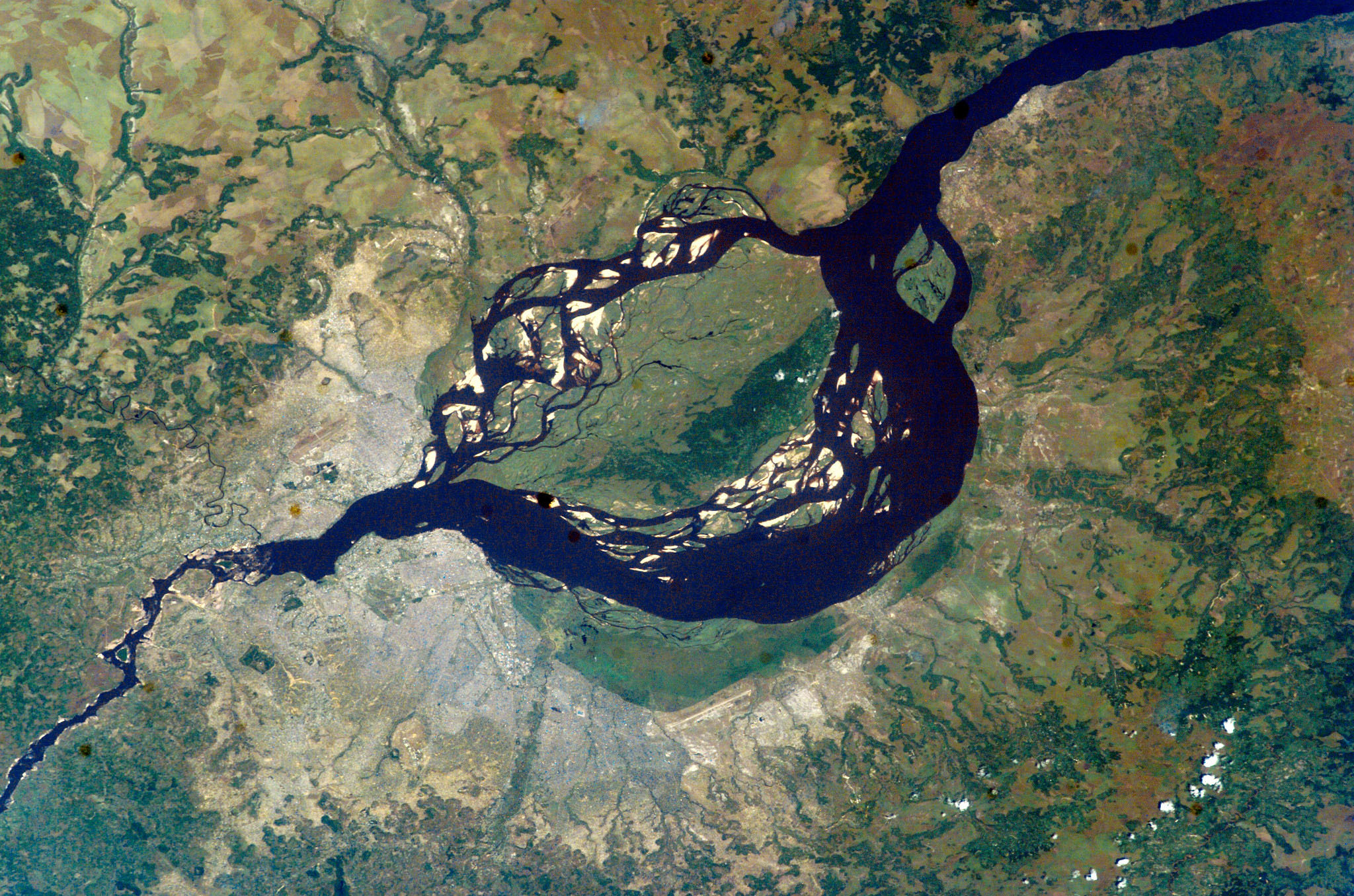 A view of the twin Congo capitals, facing each other across the Congo River. In this 2003 photo taken from the International Space Station, the smaller city of Brazzaville, capital of the Republic of the Congo, is at upper left. The much larger grey area at lower left is Kinshasa, capital of the Democratic Republic of the Congo. The cities lie at the point where the Congo River becomes navigable upstream, widening to the east into Pool Malebo – previously named, in honour of himself, “Stanley Pool” by the brutal 19th century British-American explorer Henry Morton Stanley, who murderously prospected the region on behalf of King Leopold II of Belgium. Click image for a larger view. (Nasa Earth Observatory, CC BY 2.0)

Dakar: the western tip of Africa 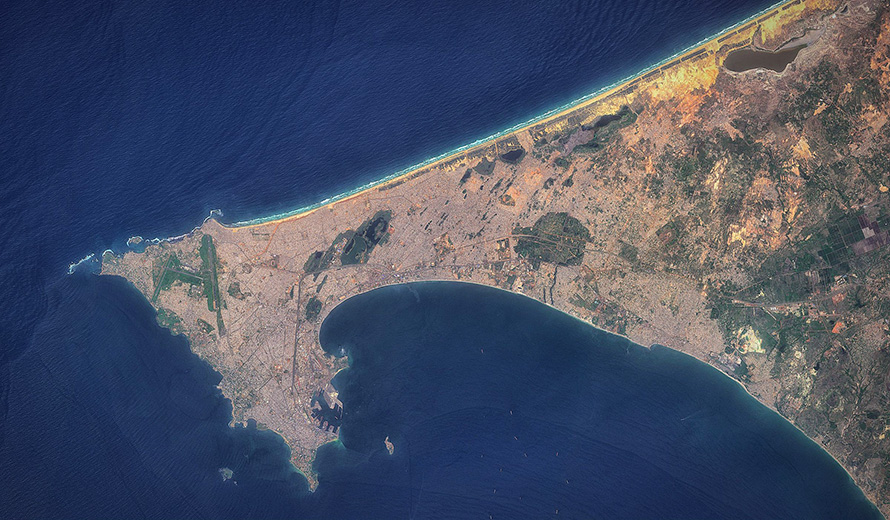 Dakar, Senegal‘s capital city. This arrow-shaped peninsula is the westernmost point of the African continent. Click image for a larger view. (Antti Lipponen, CC BY 2.0) 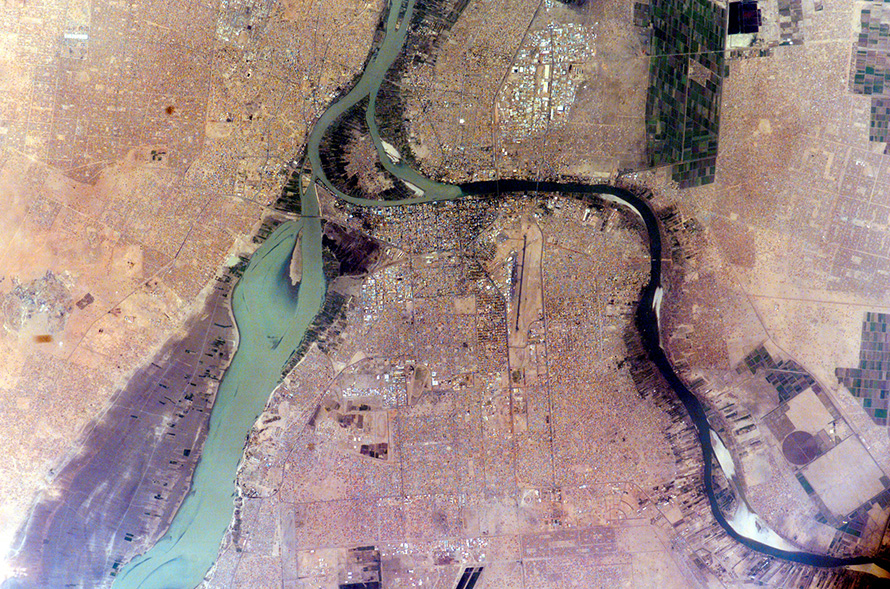 The White Nile and Blue Nile rivers meet in the city of Khartoum, the capital of Sudan. Here they form the great Nile River, which then flows north through Egypt to Cairo and empties into the Mediterranean Sea. In this image taken in the 2005 dry season, the still-flowing White Nile is at left, and the nearly dry Blue Nile curves at right. The source of the White Nile, near the equator in Uganda, produces a nearly constant flow throughout the year. The Blue Nile, by contrast, rises from the highlands of Ethiopia where it is fed by the rainfall of summer monsoons, producing floods in autumn but drying out in the spring. The scars of rainy season floodplains can be clearly seen on the banks of both rivers. Click image for a larger view. (Nasa, CC BY-NC 2.0) 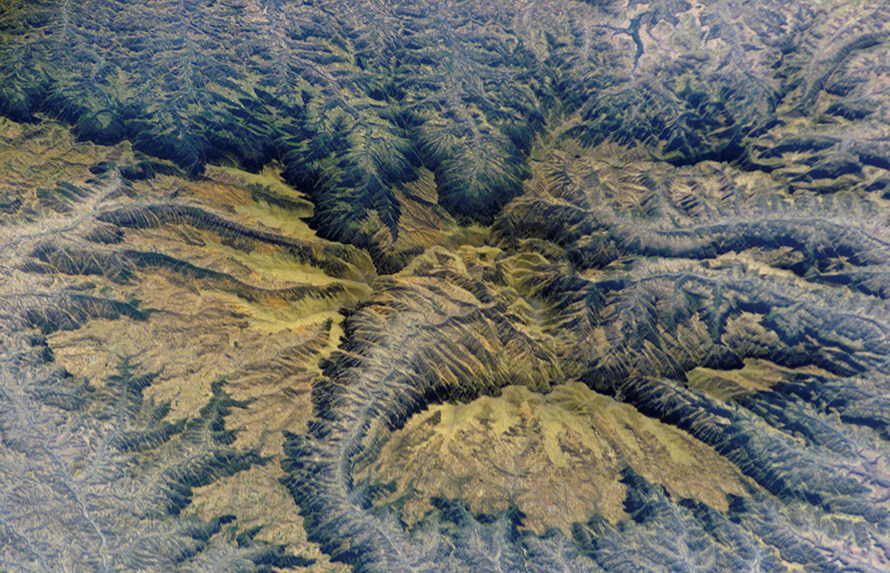 Created by rapidly erupting lava 31-million years ago, the Simien Mountains in northern Ethiopia, near Gondar in the Amhara region, look like a map of Middle Earth. The mountains are highest part of the Ethiopian Highlands, and surrounded by a steep, ragged escarpment with dramatic vertical cliffs, pinnacles, and rock spires – scenery that draws international tourists. Their basalt volcanic rock is more than three kilometres thick. The world’s only other mountains formed in this way, by massive floods of lava, are South Africa’s Drakensberg range. Ethiopia’s Simien National Park has been awarded Unesco World Heritage status for its “outstanding universal value” to humanity, which rivals that of Colorado’s Grand Canyon. Click image for a larger view. (Nasa, CC BY-NC 2.0) 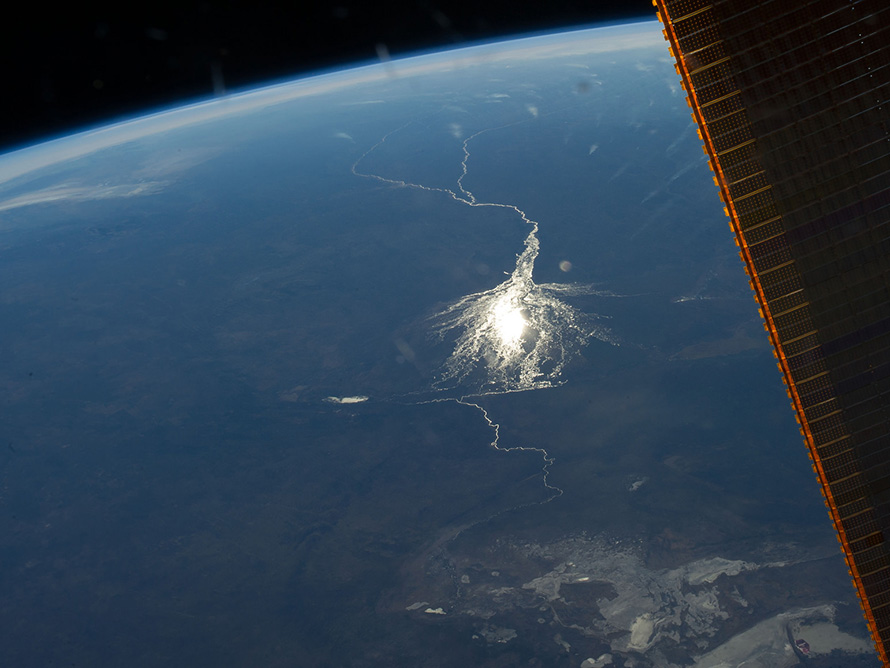 Sunglint illuminates the great Okavango delta in the Kalahari Desert region of Botswana, in a photo taken from the International Space Station in June 2014. The bright line of the Okavango River shows the annual summer flood advancing from the well-watered Angolan Highlands (upper margin) to the delta. These floodwaters slowly seep across the 150 kilometres of the delta, feeding forests and wetlands until they reach its lower margin in the middle of winter. Most of the river’s water is used up by the forests, or evaporates in the dry air. Only two percent of the water finally exits the delta. Okavango delta wetland supports high biodiversity in the middle of the otherwise semiarid Kalahari Desert, and is now one of the most famous tourist sites in Africa. Click image for a larger view. (Nasa, CC BY-NC 2.0)

The extinct volcano in the desert 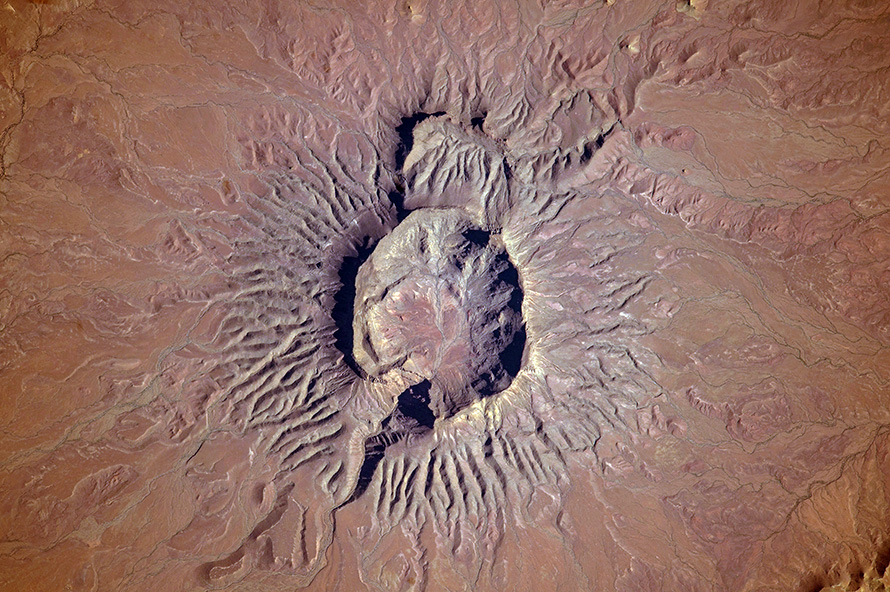 Brukkaros Mountain, a four-kilometre-wide extinct volcano rising out of the desert in the ǁKaras Region of southern Namibia. Unlike most volcanoes, Brukkaros was formed by a single event. Eighty million year ago a rising plug of superheated magma met groundwater, causing a massive explosion and creating the mountainous crater. Click image for a larger view. (Nasa, CC BY-NC 2.0)